Volleyball for the People, or for Profit? 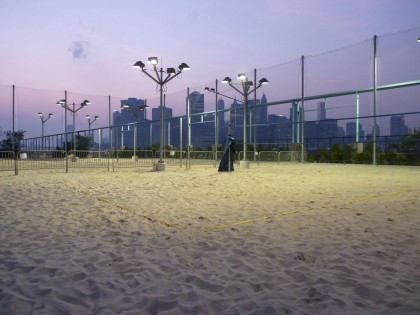 The pristine sand volleyball courts at Brooklyn Bridge Park’s Pier 6 offer one of the best views in town. As luck would have it, playing volleyball on them is also free. Enter Big City Volleyball and Metro Beach Sports, two city-wide volleyball leagues, and suddenly that privilege costs a pretty penny, even if league director David Walker doesn’t think so.

But the price is not for naught: participating teams play one pre-season game, followed by eight regular season games and playoffs, all organized by Big City Volleyball; also, and perhaps most important, there is a free t-shirt involved.

A BHB reader tipped us off to this development, and voiced his concern that the various groups of people already playing pick-up volleyball games at Pier 6 might be kicked off the courts to make room for the leagues. Not so, insists Walker, who noted that Big City and Metro Beach Sports will only hold games there on Monday and Wednesday nights.

“There are people who enjoy going down and just playing pick-up with whoever is there,” he acknowledged. “And then there’s people who want to play in a league, where play is organized by skill level, from casual, intermediate, to advanced. And they want to play in a structured league, and they want a schedule created. They want referees assigned. They want t-shirts. There are a lot of costs that go into executing a league.”

In addition, Big City Volleyball and Metro Beach Sports will run youth programs for underprivileged kids on the courts during some weekdays this summer. Metro Beach Sports, along with Metro Soccer NY, wholly funds Play Study Win, a 501(c)(3) charity that provides thousands of New York City public school children with free sports and recreation programming. According to Ian Walker, the organization’s president, the revenue from Metro’s adult leagues helps fund these carefully executed programs. They will also offer a few evenings of free volleyball instruction at Pier 6 for anybody who is interested. In fact, you can mosey on down tomorrow night at 7pm to play a quick game or two, and meet other players or groups interested in signing up for the league.

While the idea of charging people to play volleyball on free public courts might sound like a rip-off, Walker insisted these leagues are not only popular throughout New York City, but have a proven track record of success among volleyball enthusiasts. “People really get a kick out of the leagues,” he added.

So, he ‘s not trying to destroy Brooklyn with his evil volleyball ways? “I’m a Brooklyn resident also!” Walker, who lives near Grand Army Plaza, said, and promised, “We’re value added for the area.”

Big City Volleyball and Metro Beach Sports require players be 21 years of age and older. Beginning July 20th, games at Pier 6 will be held Monday and Wednesday nights at 7pm & 10pm. Teams are co-ed, and may consist of four or six people. For more information or to sign up, click here.