In 1931 the Brooklyn Eagle reported that a scheme had been developed by the Regional Plan Association to build a high-rise apartment development atop the bluff at Columbia Heights.

The implementation of the sort of slash-and-burn urban planning advocated by Robert Moses would have ruined the area. Clearly, the dominant opinion was that the old was useless and should be replaced by the new. It was then even proposed to demolish the old and unsightly Borough Hall and General Post Office and replace them with modern structures, because, while most of the post office was built in the 1930s, it copied the original 1883 design! It is also reported that in 1942 Robert Moses wished to build a highway across Brooklyn via Montague Street, which would have resulted in the demolition of the new Appellate Division court building on Monroe Place, not to mention inflicting a fatal wound on the area. The community successfully fought it. In spite of increasing deterioration, the old society elements published a Blue Book as late as 1940, containing the names of eight hundred fifty socially prominent people living in Brooklyn Heights.

There were, however, abandoned buildings, mainly factories, all over the neighborhood, especially in the northern and southwestern parts, which had once been dynamic business districts. Moreover, residential sections of the area had become truly seedy. In the 1950s children were warned not to venture south of Livingston Street because prostitutes plied Court Street there, abetted by an X-rated movie theater that survived until the 1980s. 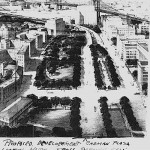 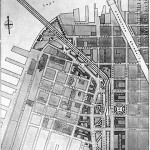 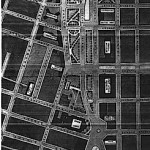 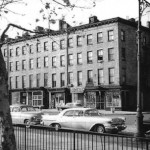 But what to do with the Heights? The answer was to tear down and replace the old, seedy parts. Starting in the 1930s, the city began to plan the wholesale demolition of much of the Heights and adjacent Downtown Brooklyn. Much of the area between the Brooklyn and Manhattan Bridges, and the north Heights along Fulton Street, was to be cleared for new government buildings. While the specific uses changed over the course of varying plans, the areas slated for demolition remained the same except for the preservation of most of the block between Pierrepont, Fulton, Monroe Place and Clark Streets.

Ostensibly the product of the Borough President’s office, the plans were actually developed by Robert Moses, who under Mayor Fiorello LaGuardia, began his reign by bringing in federal funds for park, highway and urban renewal projects.

On August, 30, 1936 the first plan was revealed by Borough President Robert Ingersoll at a meeting at Borough Hall via a model. It was to be a park to run from the beginning of Washington Street at Fulton north to the new Brooklyn Bridge automobile approach that was to replace the Sands Street el station opposite Middagh Street in the Heights. The plan featured a new version of Liberty Street to run the park’s entire length and divide it in two. It would eradicate the former department store district that had become garages, flop houses, other low-end commercial uses and abandoned buildings.

In response, the Brooklyn Heights Association proposed to close Liberty Street and to carry the traffic directly onto Fulton through the park, rather than have it filter through Fulton, Washington and Liberty. This version was eventually pursued, and an initial version of the park was opened in 1939. The park was named Cadman Plaza Park to honor the late Bedford-Stuyvesant Congregational pastor and popular radio minister S. Parkes Cadman, who some saw as the successor to Henry Ward Beecher. Obviously history disagrees. Cadman is forgotten and Beecher rides high in the light of his abolitionism.

On Sunday, December 7, 1941 (of all days), the Brooklyn Eagle published a much larger scheme for the demolition of much of Downtown and the Heights. It ran from the intersection of Henry at Fulton Streets, south to Clark Street, where it jogged to the east to include the northern half of the block bounded by Monroe Place, and Clark, Fulton, Clinton and Pierrepont Streets, and proceeded south between Clinton and Fulton to Montague Street. It then went south to lower Fulton Street next to Borough Hall and then back north to include everything west of Adams Street up to Prospect Street. The operative principle of planning at the time was that anything old should be gotten rid of, given the inclusion of the high-rise Mechanics Bank Building on Montague and Fulton Street in the urban renewal.

Envisioned in the plan along Adams were a new Transportation Building, another for the N.Y.S. Tax Commission, a new park occupying the block between Concord and Nassau Streets, and north of that a block of new buildings for Long Island University to supplement its exiting campus, then on the block between Johnson and Tillary Streets, and finally a new building of unspecified use. Tillary Street was to be widened.

Away from this area, the only change would be a Municipal Building Addition on Livingston Street to the south of the existing structure. This would replace the former Brooklyn Polytechnic buildings. It also included a new jail on Boerum Place behind the Criminal Courts building. Most of the proposed site uses would change over time. The war that began that day would postpone the project, leading to revisions during the war itself.

The war would postpone and alter the plan because federal New Deal funds were being used for the military. Planning would, however, proceed. A new version was proposed for the northern section in 1942, entitled Suggestions for Cadman Plaza, Bridge Terminal and Lower Fulton Street, Brooklyn, N.Y. The major change in this plan was the addition of the block between Fulton, Henry, Hicks and Doughty Streets to the demolition district. This did not take account of any future highways. It was accompanied by a sketch of what the area would look like by architects Slee and Bryson.

The “General Plan for Downtown Brooklyn” by the New York City Planning Commission and Borough President Cashmore, and “A Study of the Brooklyn Civic Center and Downtown Area,” were published in 1944. Parts of them became official policy by being added to the City’s Master Plan.

In November of that year the City Planning Commission published “Rezoning Brooklyn Civic Center” and “Downtown Area Study,” which delineated proposed uses for the sites. These included many changes from previous planning studies. For the first time the Brooklyn-Queens Expressway was plotted at its current position. The configuration of the Brooklyn Bridge approach and exit was moved block east from the Washington-Liberty Street area to Adams Street, where it was, in fact, constructed. A High School of Specialty Trades was projected for the crook of the approach’s arm between Washington and Adams, and from Sands Street south to Concord Street. The county courthouse proposed for Montague Street was moved to a site between Adams and Washington Street immediately northeast of Borough Hall , where it was eventually constructed. A Domestic Relations Court was proposed for the triangle of Clinton, Fulton and Pierrepont Streets, and the library that had been sited there was moved to the site of the old Mercantile Library on Montague Street where the court building had been planned. The Domestic Relations Court, renamed the Family Court, was built on Adams Street. Its building was converted into a high school in 2009. The library was completed at the southern intersection of Cadman Plaza West, Tillary Street, and Clinton Street in the 1960s.

City and Municipal Courts were proposed for the site immediately east of Borough Hall. The Transportation Building was moved from the site east of Borough Hall to a part of the former Tax Commission site. The projected State Tax building and campuses for Polytechnic University, Brooklyn Friends School and Long Island University were deleted from the plan and the schools were built elsewhere, while a new building for an unknown purpose was projected for a site south of the new high school. A new headquarters for the Fire Department was planned at the corner of Willoughby and Jay Streets. Uncommitted sites remained in the Heights and new ones were added on the downtown side.

These posts are from Robert Furman’s forthcoming book “Brooklyn Heights: The Rise, Fall and Rise of America’s First Suburb,” to be published this fall. Preview copies are now available for $50.00 postpaid on CD as pdfs. Send check or money order to Mr. Furman at P.O. Box 23365, Brooklyn, N.Y. 11202. Be the first to see this important book!

Put Plants in Pierrepont Playground
Volleyball for the People, or for Profit?