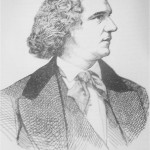 Perhaps not surprisingly, Henry Ward Beecher and his associate Theodore Tilton were early and prominent feminists. Their principal goal after the Civil War was obtaining the vote for women, but some also advocated full legal equality and what would become the feminist agenda of the 1970s. Susan B. Anthony and Elizabeth Cady Stanton formed the National Women’s Suffrage Association in New York in 1869 with Theodore Tilton as president, and Henry’s sisters Harriet Beecher Stowe and Isabella Beecher as editors of the group’s organ, the Revolution. The more conservative Boston group, led by Lucy Stone and later Julia Ward Howe, composer of the Battle Hymn of the Republic, opposed taking on other women’s issues such as abortion, birth control, divorce reform, prostitution, and financial independence, as the New Yorkers had. They felt these issues were a destructive distraction and formed the American Women’s Suffrage Association with Henry Ward Beecher as president. Equality would be a long road. Later, the two organizations merged as the American National Women’s Suffrage Association, led by two women: Susan B. Anthony and Elizabeth Cady Stanton, and dedicated only to votes for women.

After the war, Henry Bowen began work at the New York Customs House, the major source of federal revenue and corruption before the income tax, where he gave himself and his friends lucrative contracts. Later he was appointed (tariff) Collector of the Port of New York and a number of his appointees were accused of taking bribes. He accepted a gift of $50,000 in bonds and $460,000 in stock from the Northern Pacific Railroad in exchange for which he promoted the company in The Independent. Henry Ward Beecher, Harriet Beecher Stowe, and New York Tribune owner and editor Horace Greeley, also accepted such dubious gifts but did not get in trouble for it as Bowen did. Bowen supported Andrew Johnson during the impeachment struggle which lessened his influence with the local Republican Party, leading to his losing his post as Collector. The Independent was also losing subscribers to Beecher’s new magazine, the Christian Union.

The Union was edited by Beecher associate General Horatio C. King (1837-1918) who had studied law under Lincoln’s Secretary of War Edwin M. Stanton. King was a Civil War hero who won the Congressional Medal of Honor. He lived at 1 Middagh Street  and later at 44 Willow Street.

In order to regain his lost political influence, Bowen purchased the Brooklyn Union newspaper as a forum for himself and his ideas and decided that he needed a rapprochement with Beecher. In order to do this he threatened to make Henry’s affairs public and promised to keep them secret if the two became friends. It worked for a while.

In 1868, Bowen, hoping to reclaim his power, aligned himself with the pro-Grant Republicans, while a new “liberal” faction opposed him because of his corruption. The Brooklyn Union’s editor, Theodore Tilton, refused to support Grant, and called for the election of a liberal local House of Representatives candidate, who won. 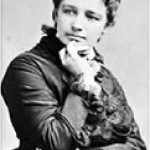 Victoria Woodhull was a spiritualist, investor colleague of Commodore Vanderbilt, and feminist. She broke into suffragist politics by testifying before the U.S. House Judiciary Committee on a proposed Women’s Suffrage constitutional amendment in 1871, but soon got into a fracas with the Beechers over Henry’s womanizing since she advocated “free love” and he was a hypocrite who practiced it but lied about it. The Victorian era, like today, would not publicly accept what it characterized as “easy morals”, and she had the poor judgment to advocate it in public, even stating that she had been having an affair with Theodore Tilton. Her downfall came when she stated, in response to heckling at a public meeting “Yes, I am a free lover. I have an inalienable, constitutional and natural right to change that love every day if I please”, and the press went wild.

In 1872 the Liberal Republicans*, now a party, nominated New York Tribune publisher and editor Horace Greeley, who opposed radical Reconstruction, for the presidency against Grant, and the Democrats supported him, with Theodore Tilton as his campaign manager. (Greeley is best known for saying “Go West Young Man,” although he stayed in New York.) He lost in a landslide. Beecher went with Grant in spite of massive corruption in his administration. To make matters worse, Woodhull ran for president although she had broken up with Vanderbilt and therefore lost his financial support. She called her effort the “People’s Party” and printed Karl Marx’s Communist Manifesto in her weekly magazine. Her campaign failed to ignite, she was evicted from her house, and no one would rent to her because of her radical views.

*The “Liberal Republican” Party was liberal in the modern sense that it opposed corruption. But it was also elitist and believed in rule by the “best people,” a concept left over from the pre-Jacksonian period. 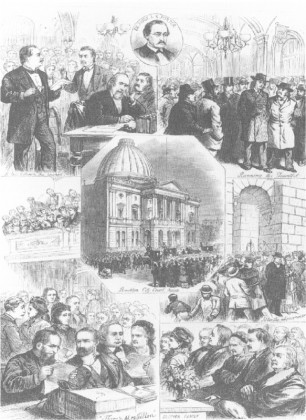 On September 12, 1872, desperate for publicity, Woodhull addressed a crowd in Boston and publicly called Beecher the “king of free love” but a hypocrite, and named Elizabeth Tilton as his mistress. She charged that he preached to a dozen of his lovers at Plymouth, which was inflammatory and an overstatement. On October 28, just before Election Day, she published an edition of 150,000 copies of Woodhull and Claflin’s Weekly setting out the sordid details of the Tilton affair, which sold out and went on the secondary market for as much as $20.00! However, Henry Bowen contacted Anthony Comstock, the notorious head of the YMCA’s Anti-Pornography Campaign, mailed a copy of the weekly to him, and had Woodhull arrested as a smut-peddler for publishing obscene materials and sending them through the mails, a federal crime.

There followed several investigations of the adultery charge by Plymouth Church and related Congregational bodies, which found Beecher innocent. Theodore sued for $100,000 on a civil complaint charging that Beecher had willfully alienated his wife’s affection. Elizabeth Tilton changed her story repeatedly, both before and after the trial, leaving no one sure what the truth was. The 1875 trial was a sensational scandal but the jury came back deadlocked and Beecher was not re-tried. Those who had charged Beecher with wrongdoing were expelled from Plymouth and he was embraced as the injured party!

Later Beecher embraced Herbert Spencer’s “Social Darwinism”, the laissez-fair defense of robber barons known as the “survival of the fittest” and later the actual Darwinism of which it was a distortion (his term was “natural selection”). He began to sympathize with labor in the strike-plagued hard economic times of the 1870s and ‘80s. This was an advanced point of view for a Republican Party that had mostly become the party of big business except for occasion bursts of reformism about civil service reform, conservation, and other issues. Beecher suffered a stroke and died in 1887, and was buried in Green-Wood Cemetery.

These posts are from Robert Furman’s forthcoming book “Brooklyn Heights: The Rise, Fall and Rise of America’s First Suburb,” to be published this fall.  Preview copies are now available for $50.00 postpaid on CD as pdfs.  Send check or money order to Mr. Furman at P.O. Box 23365, Brooklyn, N.Y. 11202.  Be the first to see this important book!