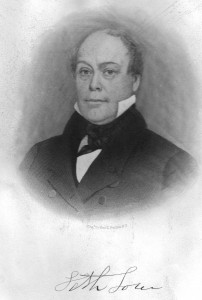 Here is another article on Heights history by Robert Furman:

The Low family fortune was begun by Seth Low the elder (1782-1853, A.A.’s father, who was born in 1782 in West Gloucester, Massachusetts. After the death of Seth’s father, who had served in the Revolution, the family moved to Haverhill, Mass.,where Seth prepared to enter Harvard College under the Unitarian minister Abiel Abbot, after whom he named his son. He left Harvard due to illness and in 1828 moved to Manhattan from Salem, Massachusetts, as a young married man, since the city was growing due to the Erie Canal.

In 1829 the entire family moved to Nassau Street in Brooklyn and later to 40 Concord Street. Low became a developer and built two blocks of houses on Concord and Washington Streets and added a “classical school” behind them. He was president of the Board of Trustees of the Village of Brooklyn and among the incorporators of the City of Brooklyn in 1834, serving as an alderman. He was the first president of the Board of Education, a supporter and board member of the Brooklyn Institute, Packer Collegiate Institute, and of other organizations. In 1843 he founded the Brooklyn Association for Improving the Condition of the Poor, which sought moral uplift and teaching the value of thrift, sobriety and hard work. He was also among the founders in 1844 of the First Unitarian Church of the Saviour on Monroe Place and Pierrepont Street, beginning a long tradition of the Low and White family involvement there. He died in 1853.

Seth Low the younger (1850-1916) attended Brooklyn Poly and Columbia College and became an Episcopalian in 1872. As junior partner in his father’s firm he worked on tea imports. He married Anne Curtis, daughter of U.S. Supreme Court justice Benjamin Curtis of Boston, indicating a continuing New England connection. In 1887 he built 186 Remsen Street as an investment and liquidated the firm in 1888 as steamships replaced clippers, becoming a wealthy man, to the tune of three million dollars, then an incredible amount. His real interest, however, lay in civic reform and politics. 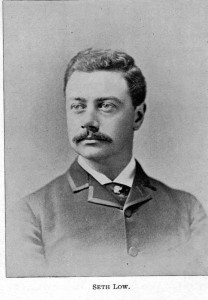 As a young man he was a volunteer visitor to the poor at the Kings County Commission of Charities where his job was to determine who needed help. He found that the Commission was a sinkhole of corruption because of the dominance of the county’s government by Boss Hugh McLaughlin’s Tammany Hall Democratic Party machine, which set him on a lifetime’s course as a reform Republican. He achieved reform of the Commission as its president.

Seth was a Mayor of Brooklyn from 1881 to 1885. He appointed competent professionals to head city departments, was active in school reform, giving textbooks to all students (not just those who took a pauper’s oath), hired teachers via civil service exams rather than on a political basis, abolished segregated schools, and reformed the tax system to collect arrearages. Large property owners either relied on lax Tammany administration by McLaughlin to underassess their property or else paid off the Tax Department to do so. Low established fair assessments, shifting the tax burden off the middle-class and onto the wealthy. 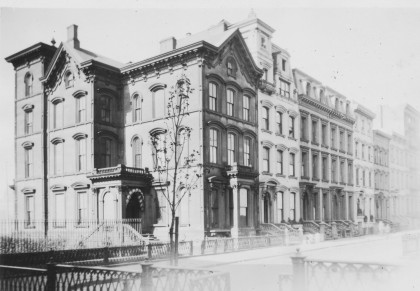 As an adult Low lived in two houses in the Heights: 201 and 222 Columbia Heights (the former Peter C. Cornell House), on opposite sides of Columbia Heights. Both were torn down around the time of the construction of the BQE-Promenade. 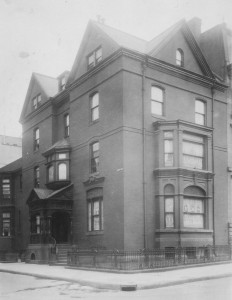 Seth Low was president of Columbia University from 1890 until 1901. He made Columbia College into a University by professionalizing and expanding it. He founded the law and medical schools, and brought Teachers College and Barnard College into the university, following the then predominant German model for universities. He moved Columbia from 50th Street east of Madison Avenue to Morningside Heights, where it purchased seventeen acres from the Bloomingdale Insane Asylum. (It had earlier been located west of today’s City Hall.) He retained Charles Follen McKim, of McKim, Mead and White, to design a new campus, of which the university library is the centerpiece. Low personally endowed it to the tune of one million dollars, one-third of his personal fortune, and named it the Low Memorial Library for his late father, A.A.

While president of Columbia he supported the creation of Greater New York (today’s five boroughs) as chair of the Charter Revision Commission, and ran for mayor as a Republican and Citizens Union (then a political party) candidate in the first consolidation election in 1897. He lost to corrupt Tammany hack Robert August Van Wyck (as in the Expressway).

In 1901 he ran with the support of the Republican Party, Citizens Union and independent Democrats, and won. He served one two-year term. He supported subways entering Brooklyn, the Pennsylvania Railroad tunnels under the Hudson River (until then one had to take a ferry across) and the electrification of the New York Central railroad, which allowed the open tracks north of 42nd Street to be covered (and the land created by air-rights to be sold at a huge profit) when Grand Central Terminal was constructed.

As mayor he repeated his record of honesty and reform in Brooklyn, but lost public support because of his inflexible application of the law at a time when elected officials usually played it fast and loose. For example, he denied an injured employee workmen’s compensation because the man had not held his job long enough, but gave him the thousand dollar indemnification out of his own pocket. What became a serious political problem was that he strictly enforced blue laws that limited liquor sales and bar hours, alienating his German-American supporters whose beer gardens were community social centers (Irish New Yorkers were Tammany supporters since they controlled it). Because of this and his elitist attitudes, he failed of re-election.

He was the first successful “fusion” candidate for mayor, running as a Republican, Independent, and with some Democratic support, a pattern for liberal Republican that would be repeated by Fiorello H. LaGuardia, John V. Lindsay, and Rudolph Giuliani.

He later was president of Tuskegee Institute where he worked closely with Booker T. Washington, and the Regional Plan Association.

Surprisingly, for that era, he opposed any form of racial and religious discrimination, an incredibly advanced position. He was succeeded as president of Columbia by Nicholas Murray Butler, who instituted maximum Jewish quotas, a policy soon instituted by the entire Ivy League. When Mayor of New York he wrote Butler an open letter opposing the quotas. He also supported the right of labor to organize. In retirement he bought a farm in then-rural Bedford Hills, New York, and sought to advance cooperative farming. He died in 1916.