By brooklynheightsblog on April 17, 2011 7:10 pm in Brooklyn Heights, Government

Not only can you park in a bike lane to go to church, some people use their official cars to do it. 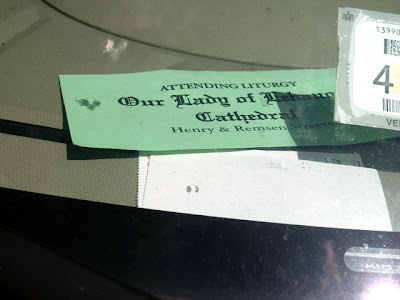 Not only did the police countenance the huge bike-lane blockage by Our Lady of Lebanon parishioners today, but instead of writing any tickets, I was asked by an officer what I was doing taking photographs.

When I inquired if that was illegal, he told me I better not scratch a car (which I wasn’t touching).

A Henry Street resident I spoke with, not only cited the danger of cyclists having to divert into traffic from Montague to State Street, but said the weekly parking on the sidewalk causes the pavement to crack. Something the homeowners are responsible for fixing.

His Name is Otis – Brooklyn Heights Girl Reunited with Toy Penguin Thanks to an Alert Pooch, Good Neighbors and BHB
Heights History: The Two Seth Lows