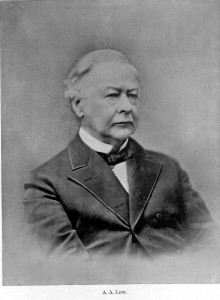 Most people know the AA Low house at the Montague Street Promenade entrance (3 Pierrepont Place). But do we know who he was besides the father of Mayor Seth Low?

Abiel Abbot Low was born in Salem, Massachusetts in 1811 and, through his father, Seth the Elder, became involved in the China trade in a side business with Houqua, the wealthiest merchant in Canton. He worked for an importing company called Russell and Company in Canton, China in 1833.

During the Panic of 1837, this business enabled A.A. to bail out his father’s firm and he thereby became a partner in Russell and Company. In 1839 the Chinese began a crackdown on the opium trade, which was among the Low family export products, so they surrendered their opium stocks and ceased involvement in that trade. They continued to buy and sell Japanese silk, Chinese fabrics and spices, and other goods. In 1840, after becoming a partner at Russell, he returned to his family in Brooklyn, where he founded A.A. Low & Brother. 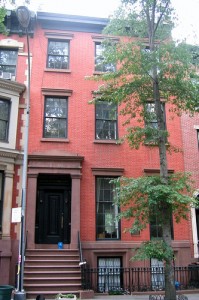 A.A.’s first home of his own was at 165 Washington Street, where his son Seth was born in 1850. A.A.’s wife, Ellen Dow, died that same year, and he married his late brother, William H. Low’s widow, Anne Bedell Davidson and had several children with her. Thereby the sea captain, Mott Bedell, became Seth the Younger’s step-grandfather. Mott Bedell’s house survives at 11 Cranberry Street and is marked by a plaque. He had previously lived at the still extant house at 51 Hicks Street (then No. 47) in 1833.

Around 1845 A.A. Low built the first streamlined, or “clipper” ship, the “Houqua”, which was named for his Chinese partner and captained by his brother Charles Porter Low. They were the fast transports of the time, especially in the faraway China trade. He was managing partner of Low, Griswold and Aspinwall and later A.A. Low & Brother, the largest firm in the China trade. Instead of going around Africa they braved Cape Horn at the tip of South America, which enabled them to also transport passengers and goods to San Francisco for the gold rush. The clippers set numerous speed records. Their still-famous Flying Cloud set a New York to San Francisco speed record and sailed over 433 miles in one day! To give an idea of the standards of the time, another clipper, the Oriental, made the run from Canton to London in a record ninety-seven days in 1850. A.A.’s office on John Street, in Manhattan between front and South Streets, survives in the South Street Seaport Museum.

A.A. was also involved in civic affairs as a founder of the Mercantile Library, president of Packer, and as an incorporator of the Long Island Historical Society. Low played a major role in stabilizing the nation’s economy at the outset of the Civil War.

As a director of the New York Bank of Commerce he helped support the federal government by floating loans and selling bonds. As president of the New York State Chamber of Commerce in 1863 he organized mercantile opposition to possible British and French support of the Confederacy. He was treasurer of the New York Union Defence (sic) Committee and raised funds to outfit soldiers. He even lost one of his own ships to Rebel raiders. After the war he was a major investor in the Atlantic Cable, with Collis P. Huntington, in the Chesapeake and Ohio Railroad, and in iron foundries in Virginia. He helped found Newport News, Virginia, and Huntington, West Virginia. He also supported federal subsidies for the U.S. Merchant Marine. It is said he sited his house on the harbor in the Heights so he could see his ships across the East River.

A.A.’s son Seth was Mayor of both Brooklyn and Greater New York, and in between (1890-1901) president of Columbia University, where he moved the campus to Morningside Heights. He personally endowed the library and named it for his late father, A.A. Low (1811 -1893).

Bob Furman is president/founder of the Brooklyn Preservation Council. His book chronicling the history of Brooklyn Heights will be released later this year.