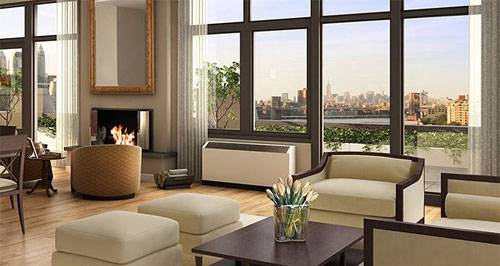 Actual human beings are moving into One Brooklyn Bridge Park this weekend, according to the Brooklyn Eagle. New residents will be serenaded by Cabaret Francais on Monday evening, the paper says they’re known for “eloquent and romantic melodies, and to the syncopated rhythms of cool jazz”. Fancy!

Brooklyn Eagle: First Residents..: The lobby recreates the original “streamlined grandeur of the monumental 1929 building,” according to Levine. In addition to a full-time concierge and a large cold-storage room, the lobby now has multiple entrances — from Furman Street, Joralemon Street and Atlantic Avenue.

The building is the former home of the Watchtower’s shipping complex whose address was 360 Furman St. In its reincarnation as One Brooklyn Bridge Park, it now offers a variety of spacious loft apartments, townhouses and penthouses many with the building’s original columns.

Off Topic: Fink’s Cautionary HDTV Tale
Second Week in the Piazza, Will it be Better?