If Judith Jarosz’s infectious energy and David Fuller’s quiet confidence are any indication of what Theatre 2020: Visions for a New Millennium will be like, then expect their new theater endeavor to be serious, and seriously entertaining.

“We look at everything like an opportunity,” Jarosz, whose personality is as fiery as her mane of red hair, said recently over a cup of coffee at Heights Café. “That’s the kind of people we are.”

They are also—very much—theater people, having worked in the industry, in one way or another, for all of their adult lives. Most recently, Jarosz and Fuller were at Theater 1010 on Manhattan’s fancy, far-away Upper East Side. Housed in the Park Avenue Christian Church since 1955, Theater 1010, which was the longest continuously operating Equity theater company in New York City, began to buckle under the weight of the recession.

“The church was rethinking all of its programs, and everything in its building, and how to address the financial situation,” Jarosz, who was 1010’s producing artistic director for more than a decade, said. “Ultimately, they disbanded the theater. It had just turned 55 years old. The ongoing legacy is gone.”

Rather than dwell on the loss, Jarosz and Fuller, who was 1010’s executive director and, before that, ran the Jean Cocteau Repertory for six years, immediately founded Theater 2020, which will make its home where they make theirs: Brooklyn Heights.

“We love Brooklyn Heights!” cried Jarosz, decidedly the more loquacious of the two. “There’s no professional theater company, which is kind of amazing when you think about it. There are eclectic neighborhoods all around us, including Brooklyn Heights, so it seemed like a natural fit.”

Theater 2020, a not-for-profit entity, will continue the style of work that Jarosz and Fuller produced at Theater 1010—works by, among others, George Bernard Shaw, William Shakespeare, Oscar Wilde, and Rogers and Hammerstein. They also plan on using their new project as a means for promoting women playwrights and directors.

“For years, I’ve noticed there’s, like, 80 percent more roles for men, and at auditions 80 percent more women show up,” Jarosz said. To correct what she saw as a “huge” imbalance, Jarosz demanded play submissions at 1010 have an equal amount of male and female roles, and she also tried to find opportunities where women could play men’s roles. She noted, laughing, “Shakespeare would have been so on board.” 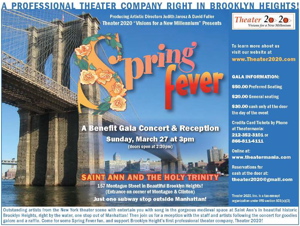 For now, Jarosz and Fuller are focused solely on this Sunday’s Spring Fever gala at St. Ann and the Holy Trinity Church in Brooklyn Heights. Jarosz described the event, excitedly, as a concert and reception featuring cabaret and Broadway singers, all of whom donated their time to help Theater 2020 raise money for future projects. There will also be a raffle, with prizes donated form nearby Montague Street establishments. Tickets are still available, and range in price from $20 to $50. For more information or to attend the event, visit www.theater2020.com.

After the party, however, comes the work, something Jarosz and Fuller are ready for, and totally accustomed to: between them, they have produced, directed, performed in, choreographed, or workshopped nearly 100 plays, musicals, readings, and tours.

To say that they have experience is an understatement, but that doesn’t make the idea of starting their own company any less daunting. The responsibility falls solely on Jarosz and Fuller to source material, audition actors, raise money, and find a permanent home for Theater 2020. And they wouldn’t have it any other way.

“Artists are like water,” Jarsoz said. “You block water, if finds a way. So, we’ll find a way.” 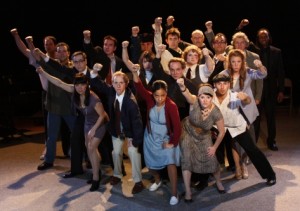 Cast of "The Cradle Will Rock," choreographed by Jarosz and directed by Fuller at Theater 1010

They’ve already got some ideas for productions they’ll put on in the next few months, and Lynn Marie Macy, formerly of Theater 1010, will be Theater 2020’s resident playwright. Macy is presently working on a new play based on a very early Jane Austen novelette, tentatively (and provocatively) titled, “Lady Susan, or the Captive Heart: A Jane Austen Bodice Ripper!” It will world debut at Theater 2020 next year.

But first, Jarosz and Fuller will produce that most romantic of ill-fated love stories, Romeo and Juliet, both locally and in upstate New York. “I’ve done a lot of Shakespeare,” Fuller noted. “To have the audience in the palm of your hand is wonderful.”

Though he is less vivacious than his wife of eight years, Fuller is no less passionate about their new venture. “It’s a great attraction for me to be starting something,” he said, thoughtfully.

“I can’t think of anything more exciting than getting up and going to work in my own neighborhood,” Jarosz crowed, and explained why she and Fuller are the perfect people to bring professional theater to the Heights. “We have the experience, we live right there, we care. I believe things happen for a reason.”

As they plot their path, the two are careful not to let Theater 2020 get too hectic in the beginning. Because, as with any new project, “So many things can go wrong—so many!”  said Jarosz, with typical dramatic flair. That possibility seems markedly diminished, however, with two such luminaries at the helm.