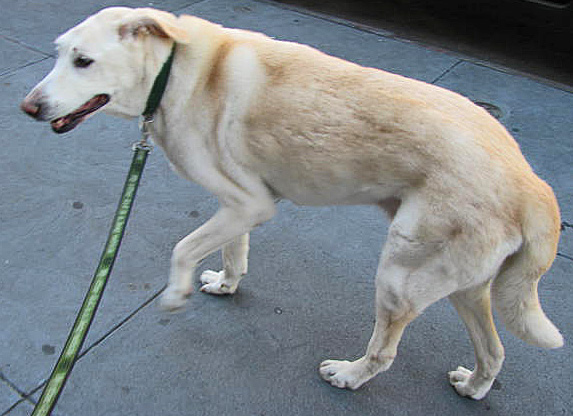 “Can I pet your dog,” an eleven-year-old boy asked me this afternoon.

The kid looked confused. I consider it a civic service to share dog love, but Zanzibar is different. Zanny turned seventeen in April, which, depending on the chart one consults, is either 99 or 119 years old in human years. He has acute arthritis in his back hips and legs, his eyes are milky blue with cataracts, his hearing is shot. He likes people, when he notices them, and he loves other dogs, but once he’s in motion, I have to stay with him.

I wake Zan up with a sketch of a belly rub. He can’t roll over but the light scratching of his ribs elicits a smile of his good old days. What comes next is a train wreck as he pulls himself up by his forelegs, buckling and panting as his paws seek purchase on the floor.

I don’t pet Zanzibar because it hurts him. He loves me, his female human tells me, because he pushes his head into my leg, in effect petting himself.

His male human tells people who ask (everyone asks) what breed Zan is, that he’s a Himalayan shepherd or a Moravian wolfhound. I once fed someone a story of him being part Sheffieldpinscher, part Dinmont mastiff. My questioner nodded his head gravely and said, “I thought it had to be something like that.”

None of these breeds exist, even in the fashionable oodle universe where every breed is being crossed with a poodle. Zan is a mix of Lab, Great Dane and, maybe, some shepherd. He’s the height and hairiness of a Shetland pony with paws the size of my hands.

Zan picks up those paws with great deliberation and articulation: one; then another; then another. For six or ten blocks, depending on the weather and his bowels, we paw-plop along. He pauses to sniff ivy or meet the yapping Havanese that could take Zan down, and he halts at corners as if trying to remember what he’s there for. I used to be embarrassed by Zan’s favorite pee spots but one nice thing about such an old dog is that he can’t lift his leg to aim.

And there’s the rub. Strong winds knock Zan over. Taking a dump leaves him weaker because of the strain on his back legs. I let him decide which side of the pavement he’s going to walk on because I have visions of tumbling him to the ground by pulling on the leash. He smells dogs but doesn’t differentiate among humans. Is it any wonder that when an elderly woman, walking straight at us, asked me if I could move my dog, I said no?

And is it any wonder that I hate Liberation Hour when kids, fresh from school, are traveling in mothers’ prides for play dates and racquetball lessons? Recently, Zan and I were making our way, single file, down Hicks when a wave of six year-olds ran screaming across Montague Street and one of them smashed into Zanzibar. Luckily, it was the kid who fell. I snapped.

“Could you control your children!?” I hurled at the Mom in Charge.

She made a well-I-never face at me and said, “Brooklyn is for everyone, you know.”

“Exactly,” I said with a tureen of sarcasm. “Including the dogs.”