BHA, Others Sue to Stop Development of Tobacco Warehouse 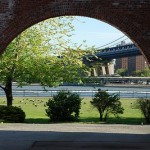 The Brooklyn Heights Association, along with the Fulton Ferry Landing Association and the New York Landmarks Conservancy, have sued both the New York State Office of Parks, Recreation and Historic Preservation (NYSOP) and the Brooklyn Bridge Park Corporation in state court, claiming that NYSOP acted illegally in its application to the National Park Service to have the Tobacco Warehouse site, at Water and Dock Streets in the Fulton Ferry Historic District, removed from federally protected park land. They have also sued the Park Service in federal court, alleging that the Park Service “performed no meaningful diligence at all” in granting NYSOP’s request, and seeking to enjoin the transfer of the site to a private party for development. As we previously reported, the Brooklyn Bridge Park Corporation has conditionally approved the plan by St. Ann’s Warehouse to develop the space inside the shell of the Tobacco Warehouse as a new home for its performance facility. More details are at Courthouse News Service and in the BHA press release following the jump.

The BHA has provided the following information about these legal actions and their background:

Plaintiffs, represented by Gibson, Dunn & Crutcher, brought these suits after obtaining documents through the Freedom of Information Law which showed that City and State officials launched a secret plan to remove the Tobacco Warehouse from the park’s map so that it could be given to a private organization for free and for its sole and permanent use.

“The purpose of having protected parkland is to guard it for open access by everyone, regardless of background or ability to pay. After 5 years of programming with many events by a diverse collection of groups with varied missions, including art, cultural, musical, and recreational, the government has secretly turned over the keys to a monopoly of one,” said Jane McGroarty, President of the Brooklyn Heights Association. McGroarty said the lawsuit was the only remaining option to save the Tobacco Warehouse after her plea to the National Park Service (in July 2010) went unanswered.

“People have enjoyed this lovely space for years as an integral part of the park and the views,” said Rep. Nydia M. Velázquez (D-NY). “We must not only keep the Tobacco Warehouse in the Park, but we should look for ways to expand access to its flexible open public use.”

The Tobacco Warehouse is a 25,000 square foot unroofed historic space that was saved from demolition twice in the past 40 years. The community convinced the government to spend more than $2 million to renovate the Tobacco Warehouse and the Fulton Ferry Park, where the Warehouse resides and as a result, the Warehouse was host to many outdoor events – dance performances, concerts, family and children’s events.

State Senator Daniel Squadron also expressed his concerns, “I’ve long said that transparency and community input are crucial as we work together to help Brooklyn Bridge Park reach its full potential. The Tobacco Warehouse is a big part of that potential, and a unique community amenity — the process for determining its use must adhere to these principles. If true, the issues being raised today are disturbing and call the process into further question; they must be dealt with swiftly.”

“The Tobacco Warehouse has great historical significance and has been saved repeatedly over the years by some of our local community groups. In light of this new information, I believe it should remain as is — a stabilized architectural ruin programmed as a multi-purpose space accommodating a variety of activities,” added Assemblymember Joan Millman.

Joan Zimmerman, President of the Fulton Ferry Landing Association said, “The process was manipulated by unelected bureaucrats to get the results they — not the people — wanted. This isn’t the way a democracy is supposed to work.”

Update: For the really wonkish (Publius, are you with me?), Dumbo NYC has what’s supposed to be the nitty-gritty of what went on amongst the defendants in the lawsuits. Curbed’s Sara Polsky read it, but still wants an explanation.