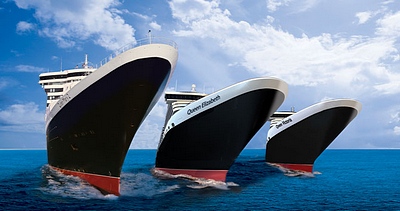 Cunard’s three “Queen” cruise ships–Queen Mary 2, which makes her home port at the Brooklyn Cruise Ship Terminal, Queen Victoria, and the newest in the fleet, Queen Elizabeth, will all arrive in New York tomorrow, Thursday, January 13, at about 6:00 a.m. Mary will berth at Red Hook, as usual, and will be visible from the Promenade all day, while Elizabeth and Victoria will dock at the Manhattan Cruise Ship Terminal near the foot of West 55th Street.

At about 6:00 p.m. the three Queens will depart from their docks and converge at about 6:45 in the harbor near the Statue of Liberty, where they will remain during a Grucci Brothers fireworks display, then proceed to sea. This should be visible from the Brooklyn Heights Promenade, and from the pier near the foot of Van Brunt Street in Red Hook, although the best viewing will be from Battery Park or the Battery Park City Esplanade. More details are on Cunard’s website.