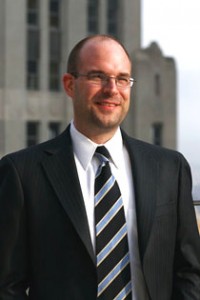 This past Saturday, May 3rd, I attended the Atlantic Yards Time Out rally sponsored by BrooklynSpeaks.net, the Council of Brooklyn Neighborhoods, and Develop Dont Destroy Brooklyn. There were scores of local residents, several community leaders, and a handful of elected officials who came together to ask Gov. Paterson and Mayor Bloomberg to demand a time out on any further construction or demolition on the Forest City Ratner project.

Although the 25th Senate District doesnt include Atlantic Yards, the neighborhoods that I hope to represent in Albany (Carroll Gardens, Cobble Hill, Brooklyn Heights) will be affected by the construction and development of the stadium and commercial/residential space. Issues that need to be more thoroughly addressed include: increased traffic congestion, increasingly unaffordable housing and the potential environmental impact on communities, from Brooklyn Heights to the Gowanus Canal.

For me, the rally this past weekend was a chance for Brooklyn to send a message to Albany that those of us who live here need to have a louder, stronger voice in how our communities are developed. The Atlantic Yards project is a rare opportunity for us to determine how our city (and specifically western Brooklyn) is going to look, live, and play for the next century. We need to ensure that ALL of those impacted by such a large development project have a chance to protect their communities, while ensuring economic stability for our city at the same time. Lets not waste this chance by pitting the fears of residents against the job opportunities the project will support. Its time we take a breatha time out.and come together to ensure that whatever happens to the Atlantic Yards site truly benefits all of Brooklyn.

John Chromczak is the Republican candidate for the 25th District NY State Senate seat this September.  John was born in 1970 in upstate Utica, New York. He attended local schools and graduated from the State University of New York College at Potsdam where he studied music performance and biology. He currently works at New York University Medical Center and Bellevue Hospital Center as a medical technologist specializing in red cell and bleeding disorders. He’s a parishioner at St. Francis Xavier parish in Chelsea. John lives in lower Manhattan with his partner Andre and their dog Bono.