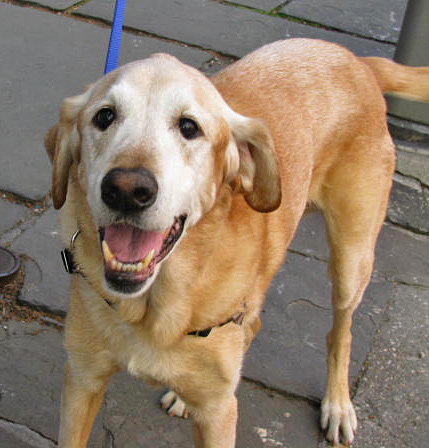 “Who’s walkin’ who?” I yelled across Pierrepont Street.

“Do you know all their names?” my friend yelled back.

“How do you keep their leashes straight?”

“What are all those keys for?”

It was a cool, gray, late spring afternoon and I was in the mood to laugh as I led Farmer, a ten-year-old yellow Lab, across the street to meet my friend.

“How’s that blog going?” she asked as one of her dogs nosed toward Farmer. He backed away and behind me. “Good boy,” she coaxed her dog. “Farmy, this is your auntie,” I piped in. It’s a dog-walkers’ version of “Row, Row, Row Your Boat,” a round of compliments and reassurance.

“I think I’ll write about mistakes I’ve made.”

“Don’t do it,” she warned. She wasn’t the only one who said this, but if I don’t admit the times I’ve been stupid and/or inattentive, I’m not telling you how I’ve learned to do my job or how it stays interesting. On the other hand, walkers and owners don’t want to be reminded that we’ve all been stupid and/or inattentive and that our dogs aren’t Cesar Milan poster kids.

Farmer was not having a good time. He’s not shy but he’s relatively new to city living, a trade-off he hasn’t made up his mind about. The smells are dizzyingly fascinating but then there’s the business of elevators and leashes and other dogs wanting to claim that lovely fresh pee on the wall of St. Charles. His Farmer Dance, an ecstatic butt- and tail-wiggling combo with paw stamping and nosing my jacket, had turned to an inside-out cha-cha to get back to the other side of the street.

By the time Farmer took his dump, he was wheezing. He sounded like he was hacking and foaming through layers of wool. Luckily, his owner had asked what I thought about their vet’s advice to give him Benadryl when he had such an episode.

Dog walkers don’t snoop. We don’t have time. But there I was, surveying the contents of cabinets until I found a pack of antihistamines on the microwave. I’m the last person in Brooklyn to have bought a cell phone and I was carrying it that day as a timepiece for a packed schedule. I called my father, an M.D. but close enough, and read him the ingredients and dosage to make sure it really was Benadryl and wouldn’t kill my old man, fingered out a gob of peanut butter and offered it up. Farmer looked up at me, wagged his tail but kept his chin on the floor. I slid the pill to the back of his tongue and massaged his throat, then laid down next to him to rub his ears.

Five minutes later he vomited but the pill stayed down. I cleaned up and waited until the situation felt stable – no more foam, no trying to throw up, his breathing labored but not getting worse.

A half hour later, Farmer met me at the door, butt and tail wiggling, his breathing almost normal but gearing up in excitement. I rubbed his and backed out before he got worked up again.

Farmer has happily met me with my pack several times, but then again, he knows me and, probably, the scents that are imprinted on my clothes. I had failed to be sensitive to his anxiety; I should have re-crossed the street as soon as he backed away.

Mistakes with dogs never take long. That one took less than three minutes, a lifetime in comparison to the attack or the lunge. They need personal space, a fluid construct that we humans can’t always anticipate. That’s when it pays, literally, to stay in the dog’s moment rather than our own.

She is the author of Passing for Thin

Confessions of a Lab Lady