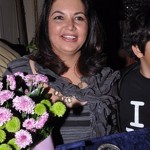 Brooklyn Heights, a novel that “tells the story of five female Arab immigrants living in Brooklyn as each tries to reconcile the history, religion and culture of their native countries while struggling to survive as a female immigrant in America”, by Miral al-Tahawy (photo left), assistant professor of Arabic at Appalachian State University in Boone, North Carolina, has received the 2010 Naguib Mahfouz Medal for Literature. The Medal, named for an Egyptian Nobel laureate in literature, is awarded by the American University in Cairo to what is judged to be the “best contemporary novel published in Arabic”.

University News, Appalachian State University: The Naguib Mahfouz Medal for Literature consists of a silver medal and a cash prize, as well as translation and publication of and English-language edition of Al-Tahawy’s work. It was presented Dec. 11 by the president of the American University in Cairo at a ceremony attended by Egypt’s Minister of Culture and other prominent Egyptian leaders.

As we previously reported, Brooklyn Heights is on the shortlist for the International Prize for Arabic Fiction (also called the “Arabic Booker Prize”), which will be awarded next March. An English translation of Brooklyn Heights is planned to be published by the American University in Cairo Press sometime in 2011.