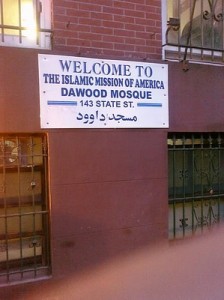 Eagle contributor and former Brooklyn Borough Historian John Manbeck recently toured Turkey, and was impressed by the respectful and friendly treatment he received in this predominantly Muslim country. On returning to Brooklyn, he decided to look into the history and present state of Islam here. Islam has a long standing presence in Brooklyn, initially brought here by African slaves, Brooklyn having had one of the largest slave populations in the North. Immigrants from the Middle East and South Asia later greatly increased the number of Muslims here. Manbeck learned that there are over twenty mosques in Brooklyn, in various parts of the Borough. One of these, the Dawood Mosque, named, Manbeck notes, “for its Jamaican founder, Sheik Dawood Faisal”, is located at 127 State Street, here in the Heights. He decided to visit it for a Sabbath service.

Brooklyn Daily Eagle: The Dawood Mosque’s Friday noon Sabbath service on Nov. 19 had a guest clergyman, Imam Abdelhamid. I was met at the bottom of the brownstone’s steps by Dr. Ahmad Jaber, president of the Arab American Association of New York and current president of the Brooklyn Heights Clergy Association. Inside the door, we removed our shoes just as I had done in Turkey. Women, very fashionably dressed, are permitted but must worship on the second floor out of the sight of men.

The sermon was given from a short pulpit by the imam dressed in white robes…The service began with a call to worship, similar to the calls from minarets that we heard five times a day in Turkey. The subject, with quotes from the Qu’ran, was about friendship, sharing, hospitality and maintaining contact with one’s family.

In my impression, Islam—meaning “peace” in Arabic—is a very gentle religion based on much prayer. The congregation was attentive with occasional bows to the East and quiet calls to Allah, just as “Hallelujahs” spot some Christian sermons. A closing chant concluded the service. After the service, everyone near me greeted me, shaking hands just as I had seen in Turkey.

Manbeck goes on to argue that “[t]he radicalism that has been protested in America refers to an extremist fringe extant in every religion just as fanatics anywhere will maim and kill in the vain attempt to pacify their version of God.”

In 2009 two young men, Aman Ali and Bassam Tariq, decided to visit a different mosque in New York city on each of the thirty days of the holy month of Ramadan. This was documented in a blog, 30 Mosques in 30 Days. Ali’s visit to the Dawood Mosque is chronicled in this post, which includes an interior view of the Mosque, as well as photos of the food and drink served after sundown to break the daily Ramadan fast. (Photo by 30mosques.tumblr.com).