What’s Up with Montague Street Bagels? 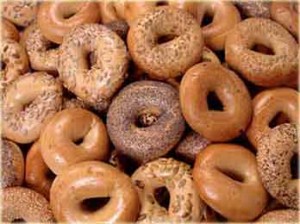 If you’ve visited Montague Street Bagels during peak hours on a Saturday or Sunday morning, then you’ve experienced the slow-moving line, the rapid-fire ordering process, and, finally, the tenuous five-to-ten-minute period during which you wonder whether the bagel you desire will actually be the one you receive. Also, you’ve become sort of intrigued by the honor system at the register. (“What kind of cream cheese did you order?” “Um, is plain the cheapest?”)

Let me just say that the bagels at Montague Street Bagels are delicious: chewy and crisp and soft in all the right places. The cream cheese variety is pleasing, as are the multitude non-cream cheese options and other foodstuffs opposite the counter. But this is New York City, and we take our bagels very seriously. We rely on our neighborhood bagel joints to provide a sense of comfort and routine almost as much as we do a satisfying meal. And when you’re pretty much the only bagel shop in a neighborhood, as Montague Street Bagels is, that is quite a burden to bear.

Joe Terranova, the new owner of Montague Street Bagels, understands this responsibility, and during a recent conversation, acknowledged that there are problems with his shop’s operations.

“If you look around, besides our bakers and our kitchen people, our front counter is totally new people,” he said in a phone interview yesterday. “It’s been a little bit of a challenge.”

Since taking the reins three months ago from previous owner Paul (“a good friend,” Terranova says), he has been working on creating a more efficient system because, in his words, “On Saturdays and Sundays especially, it’s a disaster.”

For the record, Terranova sounded as frustrated with the situation as I was, apologizing emphatically and not making any excuses. The constant mistakes and delays are, he thinks, the result of employees not taking their time. “We’re trying to have them slow down, write down orders,” he said, and promised that he’s going be more hands on behind the counter as well.

As he considers possible solutions to the problems, like moving the register to a different location or establishing a number system, Terranova wants you to know he feels your pain. “I see it everybody’s face,” he said, adding, “I’m aware of it, and I apologize.”

Also in the works for Montague Street Bagels: more additions to the recently established steam table; an expansion to the existing bagel menu; and personal 9-inch pizzas that will certainly satisfy the after-midnight crowd.

How would you improve the situation at Montague Street Bagels? Am I overreacting?