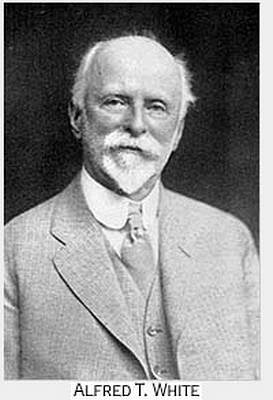 This in from Ben Bankson, President of the Willowtown Association:

The restorer of a long neglected brownstone in Willowtown in Brooklyn Heights, Jonathan Marvel, and the retiring chair of the tenants association at the Riverside Apartments also in Willowtown, William “Bill” Ringler, will become the first recipients of a new award, The Alfred, established by the Willowtown Association.

Named for pioneer neighborhood developer Alfred T. White, the new Alfreds will be presented to Marvel and Ringler at the potluck dinner and annual meeting of the Willowtown Association on Wednesday evening, November 17, at the community center on Willow Place that also bears White’s name.

The evening will begin with a “happy hour” at 6:30 at which complimentary wine and hors d’oeuvres will be served followed by the always delicious potluck dinner and the meeting.

The evening’s special guest will be Assemblywoman Joan Millman, just reelected as the area’s representative in the New York State Assembly. She is a lifelong Brooklyn resident and former schoolteacher and librarian who has served in the assembly for the past 13 years. She has been asked to give a basic civics lesson in how the state legislature is supposed to work and its relationship to a neighborhood such as Willowtown.

The new Alfred Award, says Willowtown Association President Ben Bankson, is a way to recognize significant contributions made by residents to the quality of life in the neighborhood and express appreciation to them.

Jonathan Marvel, who was born and grew up in Puerto Rico–”a Brooklyn outerborough,” he calls it–is a founder of the Manhattan-based firm, Rogers Marvel Architects. Last year he bought the brownstone at 25 Willow Place that the descendants of the last residents finally agreed to sell after it stood empty for more than four decades. He has restored and enlarged it as his own residence with a rental unit on the basement floor.

Ever since moving into an apartment in the historic Riverside complex built by A.T. White in 1889-90, Bill Ringer, a copywriter and printer, has been active in the tenants association and was its chair since 2007. He spearheaded the successful fight with the landlord to block his plan to build an unwanted commercial parking facility on the property.