By Homer Fink on October 15, 2010 6:52 am in Arts and Entertainment, Brooklyn Bugle Sessions, Brooklyn Heights 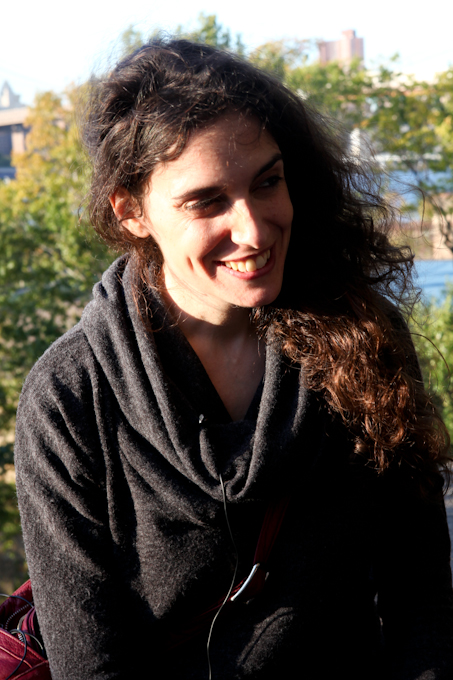 We kick off the first of our Brooklyn Bugle Sessions with Montreal born singer/songwriter NEeMA.

A frequent visitor and lover of Brooklyn Heights, she performs “Elsa’s Lullaby” from her second album , Watching You Think (available now on iTunes) while sitting on a bench outside of Middagh Street’s Van Sickel Salon.

Peformance video, produced by theshaltzes, after the jump.

But her relationship with the enigmatic Cohen, who also supplied the portrait of NEeMA for the cover art of Watching You Think, goes deeper than mere production advice.

“With the writing of these songs, he’s been part of that process since the beginning,” she says. “I started sharing my work with him. So he’s been kind of a teacher or consultant, supporter, mentor – whatever you want to call it – good friend for the entire process of this album.”

NEeMA says she met Cohen by chance roughly five years ago. They live in the same neighbourhood in Montreal and would run into each other at the cafe or in the park, where the two would eventually take her dog for a walk. Soon, he became “probably the biggest influence on my life in the past little while.”

“When he was in town, we started to hang out and share ideas about all sorts of things,” she says. “Eventually, I started to actually share songs with him. The friendship is what emerged first. After that, I started to share my music with him and my writing with him. He started drawing me. But that all came after.”

Bargemusic in Drydock for Repairs; Back Late This Month
Cops: Son a Suspect in Murder of Montague Street Real Estate Agent and Wife