Is That a Cult Holding Court at Plymouth Church? 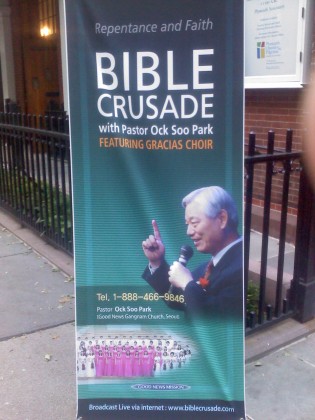 Controversial Korean religious leader Pastor Ock Soo Park is holding a Bible Crusade this week at Plymouth Church of the Pilgrims on Orange Street. Part of the Saviorist movement in his home country,  Park reportedly did not attend an accredited seminary and his organization is mostly  known for its orange t-shirted followers who aggressively hand out flyers here and around the world.

They are generally referred to in Korea as “Saviorists,” although their precise name is Association of Korean Christian Baptists. In contrast, the name of the official Baptist organization is The Korea Baptist Convention. … Apparently, Saviorist movement started in the 1960s, when an American missionary named Dick York made Park [Ock Soo] a pastor through an informal mission. Mr. Park did not attend any established seminary. (Ask a Korean via NYT City Room)

So are they a cult? Depends on who you ask.  Some commenters on the definitive website for such things, rickross.com, seem to think it is.  However, Mr. Ross has not added Mr. Park’s Good News Mission to his official list of active cults.

We’ve contacted Plymouth Church of the Pilgrims about the group’s use of its facility and we’re awaiting a reply.
Update: Plymouth spokesperson Ann Geismar tells BHB, “The Good News Church is strictly a rental, and not affiliated with Plymouth Church or our programs. We’re not supporting them financially in any way.

As you probably know, Plymouth Church rents our spaces to other religious organizations (the Brooklyn Heights Synagogue among them) and we don’t ask that they adhere to our views on theology.”