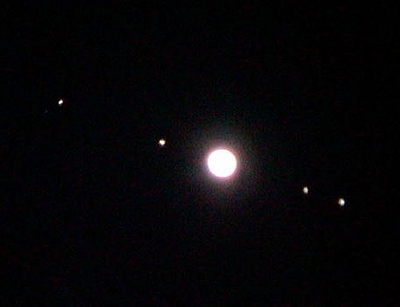 Last night your correspondent went to Pier 1, where members of the Amateur Astronomers Association of New York had set up telescopes to view various objects visible in the sky at the time. The moon and Venus having set earlier, the brightest of these objects (other than passing airplanes) was the giant planet Jupiter. Through the telescope it could be seen as a circle, with its four largest moons–Callisto, Europa, Ganymede, and Io–clearly visible, as in the photo above. (There was no equipment for taking photos through the telescopes, so I’ve gleaned from the web photos that most closely approximate what we saw.) I could just make out one of the dark cloud bands that circle the planet; another viewer with keener eyes said he could see the famous red spot. (More photos and text after the jump.) 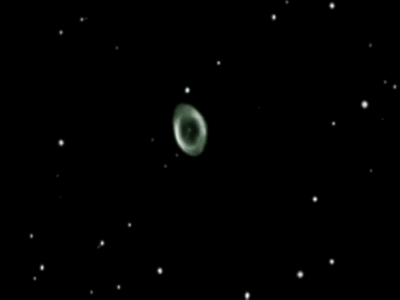 Next, we viewed the Ring Nebula, or M57, a “planetary nebula”–the remains of a star that reached the end of its lifespan–found in the constellation Lyra. “M57″ means the Ring nebula is the 57th object listed in the Messier Catalog, compiled in the 18th century by the French astronomer Charles Messier, who sought to list all the diffuse objects seen in the night sky that were not comets. Some of these are nebulae, or gas clouds, and some are clusters of stars, all within our own galaxy, but some, like M31 in Andromeda, are other galaxies. We tried to find M31 last night, but it was too low in the sky, so that the ambient city light masked it. The star Albireo, in the constellation Cygnus, was almost directly overhead. To the naked eye, it is a single point of light, but through the telescope it is revealed to be a double star, consisting of a brighter golden-yellow star, Albireo A, with a fainter bluish companion, Albireo B. While the two stars are, by astronomical standards, quite close together, it is not clear that they are a true binary system, in which the gravitational attraction between them is strong enough to make them orbit each other. Such binary, and even triple or multiple, star systems are common; perhaps the best known being Alpha Centauri, a triple system, one of the components of which is the closest star to our solar system. 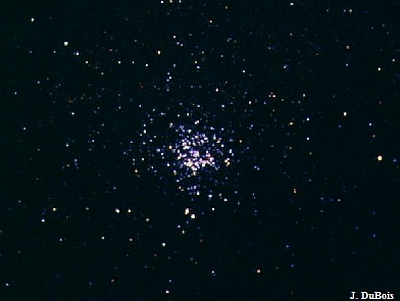 Our final observation of the night was the open star cluster M11, known as the “Wild Duck”, in the constellation Scutum. It appeared as a faint, fan-shaped smudge in the sky.

Thanks to the Amateur Astronomers Society for a most enjoyable evening.

The Pipes, the Pipes Are Calling….
Foodie Heaven at Brooklyn Historical Society