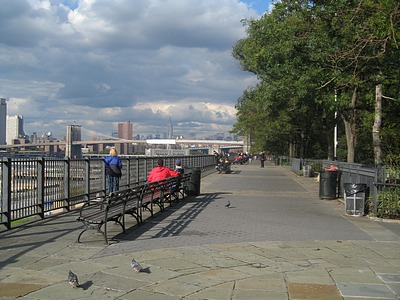 The Brooklyn Heights Promenade, or at least the portion of it from Remsen to Clark Streets, was first opened to the public on October 7, 1950, sixty years ago tomorrow.

Henrik Krogius, Brooklyn Daily Eagle: Brooklyn Heights wouldn’t be the same without the Promenade; yet it’s really only by chance that it ever got built. Unlike the park, whose every step over nearly 25 years has been reported and argued over, the Promenade was sprung on an unsuspecting public.

Krogius’ article recounts the convoluted story of how the Promenade came to be, with some conflicting claims as to who was its author. For those purists who insist that it should be called an “esplanade”, Krogius points to a record of a conversation between highway builder Robert Moses and Roy Richardson, the then president of the Brooklyn Heights Association, in which Richardson complained that building the highway at the same level as Columbia Heights–Moses’ plan at the time–would interfere with the views of those who liked to “promenade” along Columbia Heights, taking in the sights of the harbor and Manhattan visible at street intersections. Moses’ response to Richardson, indicating that he would like to have a real “promenade” with views all along instead of just at intersections, suggests this may have been the germ of the idea.