Montague BID’s Summer Space: “Come for the Dog Show, Stay for the Opera” 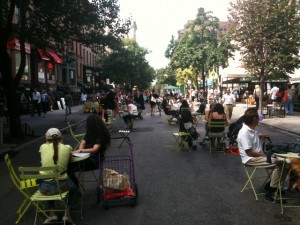 The Summer Space pedestrian plaza series concludes this Sunday September 19th, with a final day of fun and games on Montague Street. From 11am to 6pm, the two blocks between Clinton and Hicks will once again be closed off to cars. So what’s in store? The Brooklyn Heights Association will host it’s first-ever dog show at 1pm– right in front of Pets Emporium at 105 Montague Street. Your pup can compete in two of 12 different categories, including “Best Vocal Performance,” “Best Hairdo” and “Least Obedient.”

Before and after the dog show, attendees can experience a little high culture with the sounds of the Grace & Spiritus Chorale at 12:30. Then at 3pm, the Martha Cardona Theater performs arias, duets, musical theater, Yiddish folk music and highlights from Don Pasquale!