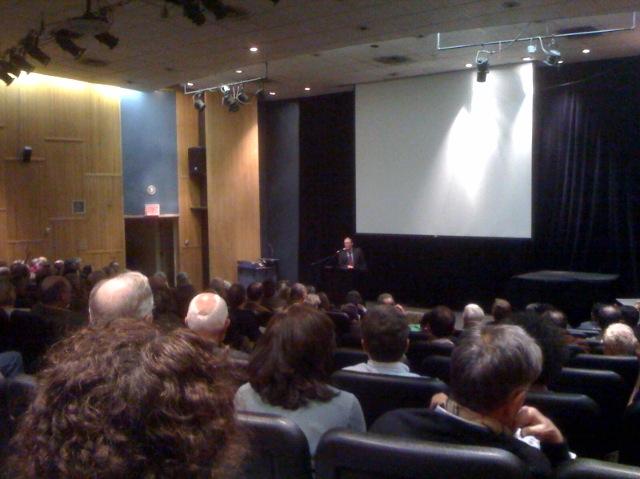 Watch this space tonight starting at 7:30pm for BHB's Live Blog from the BHA's Annual Meeting.

7:41pm: meeting underway! they just finished reading off all the dignitaries attending. Mostly, its just their minions.

they are also against noise. the next few years "exciting and terrifying"!

7:50pm: Francis Morrone will be documenting digitizing all historical data for every building in bkheights

7:55pm: they are setting up a "listserv". they will also add a modem to their BBS. actually, it will be a private yahoo group.

7:57pm: marty markowitz in the house! bill deblasio is carrying his lunch. fink refuses to call marty "little flower" no matter how much he wants it.

8:10pm: talking about the recent hate crimes. overheard some woman behind me: "wow, I didn't know…"

8:15pm: extraordinary service award given to the pool lady. really? then bring it back!

8:17pm: tom stewart leaves the stage, but not before giving everyone a channel 13 tote bag

clyde haberman on stage. FORMER bkheights resident. lived here for like 6 months before shacking up with his future ex wife. "TMI as the kids may say"

8:21pm: his talk is "what is the future of life in nyc". no mention of flying cars yet.

8:33pm:: Clyde does not heart mcdonalds but he can afford to eat elsewhere… meanwhile those who can only afford mcdonalds are trying to wrap their heads around spending hundreds of thousands on a historically accurate stoop

8:38pm: clyde q&a. bert of bert and ernie fame has the floor. clyde TMI fact: he lives on the upper west side

8:43pm: people really are concerned about the demise of mom and pop stores in bkheights. clyde: stop hating on starbucks

8:54pm: clyde talk ends. this meeting is over. ooooooh….refreshment time! everybody heads for the wine!