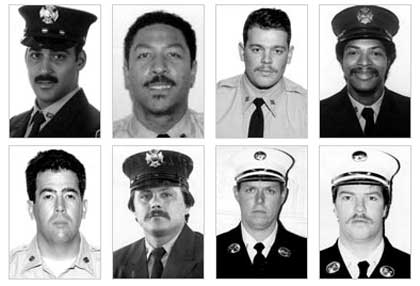 Today, we remember those lost on 9/11/01.  The photos above are of our local firemen from Engine Company 205 / Ladder Company 118 “Fire Under the Bridge”,  who rushed to the scene and never returned:

Nine years later  those seeking personal gain, have wrapped themselves in the 9/11 anniversary flaunting their ignorance while contradicting everything for which America stands.  These opportunists, cynics, racists and  xenophobes believe that dropping  “9/11″ into a sentence makes  any statement —  no matter how outrageous, false, divisive or hateful — totally bulletproof and even worse –  patriotic.

On the 7th anniversary, we wrote about the firemen Brooklyn Heights lost fighting the fires at Ground Zero.  The comments made on that post exemplify how this day needs to be remembered.  Raise a glass, fight the good fight for each individual we lost on that day.  Democracy and our way of life need not be compromised.   Those who seek to divide us, incite us or distract us on this day are nothing more than agents acting in the best interest of our enemies.

As for what’s important here are some of our neighbors’ comments and their memories from that 2008 post.  Feel free to add more in the comments below:

I can still recall clearly the booming voice of Mo Cherry as his songs echoed off the tile walls of the firehouse, and the urgency with which Express Smith would stand in front of the firehouse with his nose in the air sniffing out work, the jocularity of “The Dog” Davidson as he teased and cajoled his comrades These memories and these men will always remain in my heart and mind.

Thanks, Nabeguy… apparently Lt. Agnello was nicknamed “Joey Bells” because he accidentally set off an alarm early in his tenure at the house.

For those of you who don’t know, FF Cherry was the official tenor of the FDNY. FF Smith got the nickname “Express” because, as the driver of Engine 205, he was hellbent and determined to be the first truck on any scene.

When my daughter was in preschool over at ILC on Monroe Place, the big class trip was to the firehouse. I always made sure I got to chaperone that trip. The guys in the house were always great. They gave the kids a tour of the firehouse and then gave the kids cookies. They then turned to me and asked me if I wanted one, I said “no, save them for the kids.” So they showed me one of their cabinets; it had more Oreos and Chips Ahoys than the Nabisco plant. I just laughed and said, “You guys sure love your cookies.”

This was in the spring of 2001. Sadly, I scanned the pictures of the men above on the eleventh and remembered a few. That’s why my wife and I left a box of Chips Ahoys at the memorial.