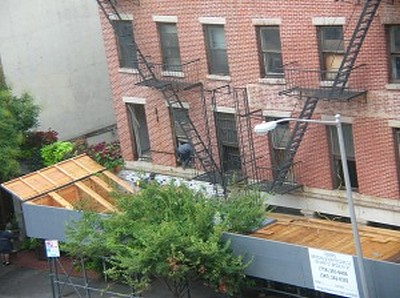 As you may have noticed, there has been some positive action on 11, 13, and 15 Old Fulton Street, thanks to continuing pressure from concerned residents, preservationists, and our elected officials. Contractors have been cleaning out the buildings so as to reduce the load on the structures, under the supervision of the DOB’s forensic engineering division. This will likely continue for the next week or so.

Additionally, we have been informed by Landmarks that the owner has retained a new engineer to revise the shoring and bracing plans. (Some of you may have seen him taking measurements at the buildings in the last week.) According to the LPC, it should take one to two weeks before the revised plans are submitted to the DOB and the LPC. Since progress on the stabilization plan continues, the DOB has approved extending the hold on demolition until September 8th.

The Association goes on to note, however, that the buildings are not yet out of danger, as the owner has previously agreed to submit plans and failed to do so. Those concerned about preserving the buildings are asked to “please send an email to the Commissioner of Buildings, Robert LiMandri, the Borough Commissioner, Thomas Fariello, and cc our electeds (see sample email, earlier post here).”