By Heather Quinlan on August 11, 2010 9:20 am in Architecture, DUMBO, History, Neighborhoods, Real Estate 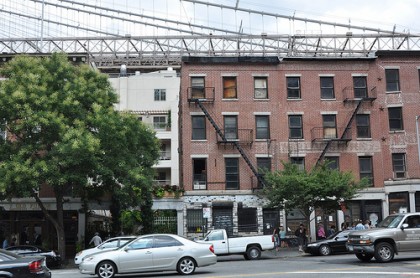 Following April’s full vacate order for buildings 11, 13 and 15 Old Fulton St., the NYC Department of Buildings has now issued the same for #9, citing “major structural defects to exterior walls.” According to DumboNYC:

A source close to the situation told us that 11-15 Old Fulton are going through the process of what is called “demolition by neglect”, which means that the City is trying to compel the owner of these buildings to maintain the property so that they do not deteriorate to the point where they will have to be demolished. Allowing buildings like this to deteriorate to that point is a tactic sometimes used by landowners who deem it cost-ineffective to renovate the existing structure, and who would prefer to raze the building and start over.

Regarding 9 Old Fulton, the owners submitted an application for a “hand demolition of one story structure”. They are probably going through the approvals process in preparation to construct a new building on that site.

All in all, sounds like the resolution—whether it’s demolishing the buildings or waiting for them to crumble—will take awhile.

Here’s more about Old Fulton (and New Fulton) from Forgotten-NY.com.