Atlantic Avenue Subway Tunnel: Holding Out for a Hero 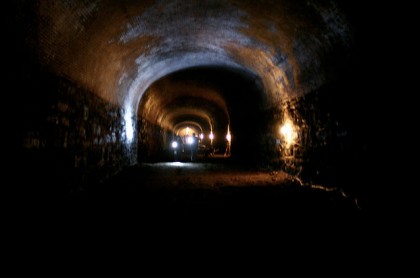 The Brooklyn Paper features an update on Bob Diamond’s quest to tear down the wall he believes hides a locomotive from the mid-19th century. More on the story after the jump.

For those of you who don’t know, Diamond leads a tour inside the world’s oldest subway tunnel, beginning at Atlantic Ave. and Court St. The tunnel comes to an abrupt end at Hicks St., but Diamond believes that the wall blocking the way is also hiding a train on the other side. Dual problems of finances and red tape have kept him from uncovering the truth; however, National Geographic recently offered to fund the expedition. Now it’s up to the city to bring the pickaxes.

“We need a knight in shining armor,” said Diamond. “We need a city official to be the champion of digging up the steam locomotive, because there is going to be a lot of red tape.”

According to the rail aficionado, there are two options for finding out what lies on the other side of the 17-foot-tall wall: knock it down, or dig in from the street. Diamond says excavating from the street presents less of an engineering challenge and that it shouldn’t take too long.

“You could do it in two weekends,” Diamond said.

If you haven’t taken the tour, it’s worth it not only to see the tunnel (wear sensible shoes), but to hear Diamond’s story about how he, even at a very young age, refused to listen to the powers that be who assured him there was no subway tunnel underneath Atlantic Ave. I heard him tell the story over a year ago so my memory may be a bit rusty, but I seem to recall Diamond saying he finally found the “X marks the spot” map in the trunk buried in a closet by City Hall that also held tomahawks and beads from when the Lanape were here.

Gothamist has more photos on their site, and you can also learn more about the subway tour here.