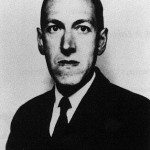 Just as Ten Montague Terrace had its window to hell in Michael Winner’s 1977 The Sentinel, so an apartment at 169 Clinton Street seemed to writer H.P. Lovecraft, the 120th anniversary of whose birth was yesterday, during his residence there in 1925-26. Born and raised in Providence, Rhode Island, Lovecraft came to New York to pursue his writing career. He lived in Flatbush during a brief, unhappy marriage, then moved to the Heights. Dan Lockwood writes in the Brooklyn Daily Eagle:

On New Years Eve, 1924 he left Flatbush, moving to 169 Clinton St. in Brooklyn Heights. Offering a snapshot of the era as well as his own psyche, Lovecraft despised the “decrepit” neighborhood (more so its immigrant residents) and may have suffered one of several nervous breakdowns in his tiny first-floor apartment on the corner of State and Clinton streets. But his imagination was never so alive: “Something unwholesome — something furtive — something vast lying subterrenely [sic] in obnoxious slumber — that was the soul of 169 Clinton St. at the edge of Red Hook, and in my great northwest corner room “The Horror at Red Hook” was written,” Lovecraft offered in a letter five years later.

As we noted here two years ago, the prior presence of Lovecraft in that apartment had a similar effect on its present day resident. Lovecraft’s description of 169 Clinton, at the corner of State Street, as “at the edge of Red Hook” may seem odd to Heights residents today, but in the 1920s “Red Hook” included all or much of what we know now as Cobble Hill and Carroll Gardens, as well as what we now call Red Hook. His phantasmagorical view of the place is expressed in “The Horror at Red Hook”, which you can read here.