Dr. Love Makes Housecall on Willow Street or I Wanna Rock ‘n’ Roll All Night (in My Minivan) 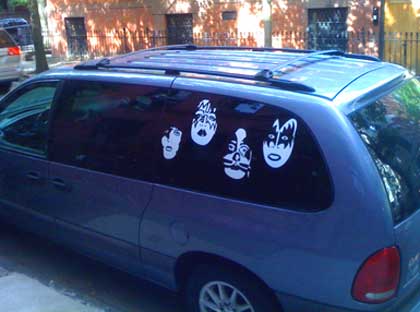 Today, the most awesomest thing happened in Brooklyn Heights — this minivan with all FOUR members of KISS on it was parked on Willow Street. We’re talking original KISS here folks – Peter, Ace, Gene and Paul.

I’m sure my old pal/Brooklyn Heights native Binky Phillips would have a story to tell about that van… or at least the band.  Oh wait… he does:

Huffington Post:… From that moment on, Gene, an extremely cocky guy even then, always treated me with respect simply because of that amp, and later, as we became actual friends, because he liked my guitar playing, too. In fact, I wound up his guitarist-of-choice for several of his demos when KISS had become gods (why Gene has never released “Rotten To The Core”, I’ll never know!). And I’m very proud to report that, years later, Gene’s only directive to Ace, according to their engineer, Corky Stasiak, when Mr. Frehley was about to record the solo for “Doctor Love” was, “Do a Binky solo!” and Ace knew exactly what Gene meant and proceeded to cut one of his wildest and best solos ever.

Back to 1972, several months after I met Gene, I got a call from Stan. He announced that I needed to start calling him Paul, please, (“Oh… Okay, Stan”) and asked me to come down to a rehearsal of his and Gene’s new still-unnamed band. They’d just found a lead guitarist a month earlier and he wanted me to check the whole thing out. Stan, I mean, er, Paul respected my opinion and seemed to be seeking my lead-guitarist stamp of approval.