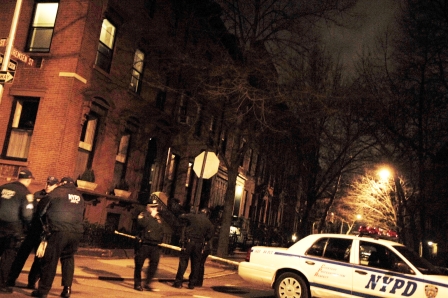 Reports from 58 Remsen Street today tell us that the suspect who appears to have had a small arsenal of guns and pipe bombs is a 31 year old male. He's been treated at Long Island College Hospital being treated for a self-inflicted gunshot wound and is in police custody awaiting charges. His name has not been released.:

WNBC-TV: NYPD Finds Explosives…: Meanwhile, residents of the affected block of Remsen Street — a small, quiet block lined with tidy, pricey buildings — have been returning to their homes. Helen Silverstein, who along with her husband Lou lives next door to the apartment building, said she had been awakened by police officers frantically ringing her doorbell at about 4 a.m. "I heard one of the police officers talking about there being blood all over," in the apartment, said Silverstein, who added that she did not know the man in question. "It was very alarming to think that this could be going on right next door to you."