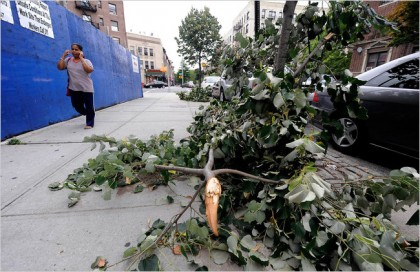 A man described as “one seriously disturbed individual” was recently caught after police and local bloggers followed his trail of torn branches. The assailant was identified as Steve Maynard, a Prospect Heights resident who had been hospitalized for a psychiatric evaluation, then released only to vandalize the trees on Livingston St. from Flatbush Ave. to Hoyt. Maynard had been spotted at night literally tearing trees limb from limb. More after the jump.

According to the New York Times:

[Councilwoman Letitia] James assigned a staff member to the case and has been working with Mr. Maynard’s family. Ms. James said that Mr. Maynard’s mother was distraught when neighbors littered her tidy courtyard with branches.

“Apparently his mother had begged the hospital not to release him, but to no avail,” Ms. James said. One of her aides and a representative from Adult Protective Services visited Mr. Maynard’s mother on Tuesday, but she had not seen her son in two days.

“Unfortunately, the system failed,” Ms. James said. “The question now is how the criminal justice system is going to handle it.

As word spread in Prospect Heights that Mr. Maynard had been arrested, feelings toward him softened some.

Philip Silva, a 28-year-old resident and volunteer with the Prospect Heights Forestry Community Initiative, said the trees were ailing, but then again, so was Mr. Maynard.

Mr. Silva said the anger of residents was partly because so many of them took pride in their street trees. He and others had received a license from the parks department to prune the trees themselves.

Mr. J. Goes to Movie With a View
Millman to MTA: Hearings a “Sham”; Restore Agent at High Street