Wake Up Everybody Move Your Car 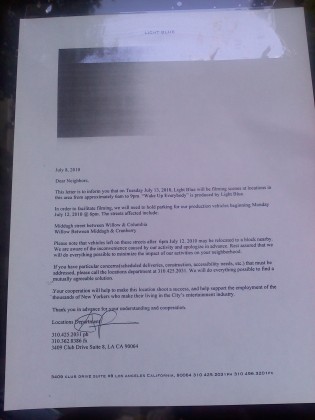 On Monday night at 6pm (7/12), if you’re parked on Middagh Street between Columbia Heights and Willow or Willow between Cranberry and Middagh you better move!  Why?  Something called “Wake Up Everybody” will be shooting in th area and they need the space.  If you’re still parked there after reading this, your car may be “relocated”.

What is this “Wake Up Everybody”?  Who knows!  There’s nothing in IMDB and the production company “Light Blue” can’t be found anywhere online. There is a new song from John Legend (with the Roots) called “Wake Up Everybody” which was featured during the World Cup.  From what we can tell there isn’t an “official” video for the tune so maybe that’s it.

Update (7/13): This is a shoot for John Legend and the Roots.  Heather Quinlan reports that they’re also shooting at Borough Hall.

filming in brooklyn, john legend video shoot, wake up everybody

The Calexico Cart is Here!
Rescue Me on Garden Place