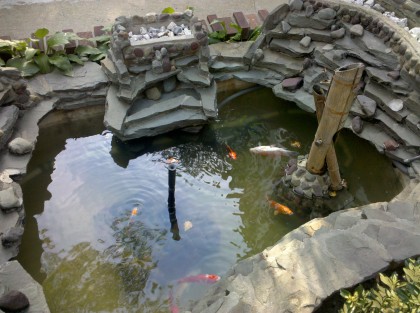 Temperatures were in the mid-90s today in Brooklyn Heights and it proved fatal for at least two nishikigoi fish in the pond on Joralemon and Henry.  A reader sent in this dispatch earlier this afternoon:

I was just stopped by a mature, concerned citizen at the corner of Joralemon and Henry. He was very upset that the koi pond’s water had been turned off (i.e. no water was circulating). It seems like without the water filtration system running, the water might be too hot — at least two of the fish were dead, and the concerned neighbor said there was a third one dead.

He said he’d tried to ring the owner’s buzzer, but no one answered. I brought him two trays of ice and he tossed them in the koi pond — but if the weather continues to be in the 90s, more fish might die!

If you have any way to alert the owners, I’m sure the fish would appreciate it.

BHB’s Qfwfq and Claude Scales raced to the scene to see if anyone in the building could help.  No one answered. DEVELOPING…

Mr. Junkersfeld to the Rescue of Historic Brownstone
As Good as it Got