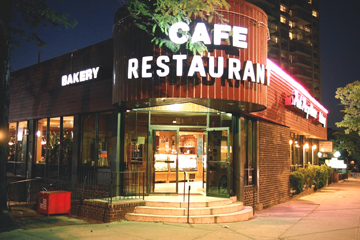 The Brooklyn Paper covers our borough's diners in this week's edition and shouts out own Park Plaza Restaurant:

Brooklyn Paper: Diner Dash: Nick Likourentzos and his family have owned this diner near the Brooklyn Bridge for all of its 25 years, and he and his brother Dimitri know each of the regulars by name. Walking up and down the aisles, they greet their aging customers like family, checking in and making sure everything is perfect. My homemade lemon-coconut cake nearly was, layered with whipped cream and light enough that I could easily have ordered a second.

The Park Plaza looks like your grandparents’ house, strewn with potted plants and exposed wood. Its lone concessions to modernity were little televisions along some of the booths promising “Dinavision: Bringing you music videos, games, television, and more.”