No Ice Cream for You at Pier 1 Until August

While other Brooklyn Bridge Park food vendors are expected to open in July,  Grub Street reports that Blue Marble Ice Cream may not be ready to scoop until August: 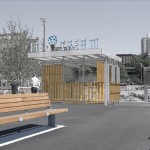 Grub Street: This is what the new Blue Marble stand in Brooklyn Bridge Park will look like, but don’t expect to get a cone until the end of July, or even August. (Navigating city park permits is challenging.) “It’s a little more substantial and cooler-looking [than a cart], and had more of a presence,” says co-owner Alexis Miesen. “We’re constructing a cool little structure composed of shipping pallets as a nod to the history of the area at Pier 1.” Find it on the southwest corner of the pier facing the Statue of Liberty. (Think of the cones-as-torches photo possibilities!) A standard cart will also serve ice cream at Pier 6.