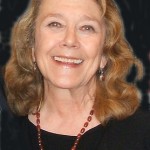 Poet, novelist, literary critic, and Montague Street resident Daniela Gioseffi has had an eventful career. The most recent anthology of her works, Blood Autumn, won the John Ciardi Award for Lifetime Achievement in Poetry. She started the Brooklyn Bridge Poetry Walk which, in this year’s incarnation, included actor and poetry enthusiast Bill Murray. She is also poet-in-residence for Brooklyn’s public schools.

Now, Ms. Gioseffi has delved into the writings and archives of perhaps America’s best-known woman poet, Emily Dickinson (1830-1886). Though dissed, along with fellow New Englander Robert Frost, by Simon and Garfunkel in The Dangling Conversation, Dickinson’s reputation as a poet whose verse anticipated modern poetics and presented profound observations in terse style has grown in recent times. (Publisher’s Note: See Ms. Gioseffi’s comment below about the photo on the left.)

The result of Gioseffi’s research is a “biographical novel” about Dickinson, Wild Nights, Wild Nights, the title of which comes from one of Dickinson’s poems, few of which had titles and are therefore known by their opening lines:

Rowing in Eden!
Ah! the sea!
Might I but moor
To-night in thee!

Professor Leila Melani of Brooklyn College, CUNY, calls this “a poem of unrestrained sexual passion and rapture.” It seems completely out of character if one accepts the conventional view of Dickinson as an asexual recluse. While she never married and, later in life, largely withdrew from society, even to the extent of conducting conversations through a closed door, she had many friendships with both women and men, though some of these were conducted largely or entirely through written correspondence. Gioseffi took as her task determining the identity of the person to whom “Wild nights! Wild nights!”, as well as other poems referring to a “Master”, were addressed. Her conclusion, in her own words, is that he was:

…a man by the name of William Smith Clark, a botanist and geologist far more famous in his day than Dickinson. He was the first Ph.D. scientist with a European doctorate to teach at Amherst College, and he lived on a hill behind the Dickinson Homestead, now a museum and historical site of the poet’s life. “On the hill/ the house behind,/ there paradise is found. /…” wrote Dickinson.

A botanist may have been a natural match for Dickinson; her Wikipedia entry quotes Judith Farr, from her book The Gardens of Emily Dickinson, as noting “that Dickinson, during her lifetime, ‘was known more widely as a gardener, perhaps, than as a poet’.”

Gioseffi is editor and publisher of the popular poetry website PoetsUSA. If you would like to purchase a signed, personalized copy of Gioseffi’s book, please contact her at daniela@garden.net