Save Our Buses Protest! 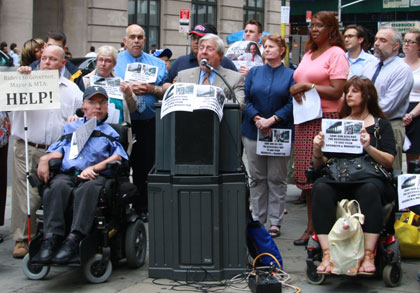 Here’s the official press release from Brooklyn Beep Markowitz on today’s protest regarding cuts to the B51, B39 and other bus routes:

BP MARKOWITZ, ELECTED OFFICIALS, DISABILITY ADVOCATES PROTEST MTA CUTS TO B51, B39 AND OTHER BUS ROUTES

Student MetroCards saved, but not service for seniors and riders with disabilities

On Tuesday, June 22, Brooklyn Borough President Marty Markowitz held a press conference and rally at the Joralemon Street bus stops outside Brooklyn Borough Hall, joining elected officials, riders and disabilities and transportation advocates to denounce proposed cuts to the B51, B39 and other bus routes, and highlight the impact the service reductions will have on riders, particularly those who are elderly or have disabilities. Cuts to these routes, along with other bus and subway service reductions, will take effect this Sunday, June 27.

“I applaud the MTA for working with Albany to preserve reduced student fares—at least for now— but the same must be done to help our senior riders and those with disabilities,” said BP Markowitz. “These routes may not be the most heavily used, but they are absolute lifelines for these riders. There is simply no reasonable way for people with mobility and accessibility issues who cannot take the subway—especially considering many stations along these routes are not ADA-compliant—to get over to Manhattan without these vital bus routes.”

The B51 is the only bus that takes riders from Downtown Brooklyn to Lower Manhattan and the B39 is the only service for passengers from Williamsburg to the Lower East Side. The B51 serves nearly 1,000 riders each weekday and more than 237,000 each year; the B39 carries 1,300 passengers daily and more than 459,000 annually. On Sunday, the MTA will also cut a dozen other bus routes in Brooklyn and eliminate the M train to Sunset Park, Bay Ridge, Dyker Heights and Bensonhurst.

In addition to the elimination of the B23, B39 and B51 and B71, BP Markowitz criticized plans to slash millions of dollars from Access-A-Ride and dramatically reconfigure Brownstone Brooklyn’s B69,
B75 and B77 routes, which will complicate commutes and lead to increased wait times. Also scheduled are reductions for Marine Park’s B2, Greenpoint’s B24, the B7 on Kings Highway, the B31 in Gerritsen Beach and several other routes.

Additionally, the MTA plans to cut the X29 and consolidate several other express routes, including the X28, X37 and X38, negatively affecting commutes in Bay Ridge, Bath Beach and Gravesend, and leaving Coney Island with no express bus service to Manhattan.

“Many seniors and people with disabilities rely on buses to get to their jobs and appointments, and have few, if any, other transportation options,” said State Senator Daniel Squadron. “We have to find a comprehensive, long-term approach to funding public transit—cuts to the B51 bus and other important routes on the chopping block without sufficient alternatives are unacceptable.”

“Cutting our much needed bus lines is unacceptable and cold-hearted,”
said Assemblywoman Joan Millman. “Contrary to the MTA’s assertion, bus service does not replicate subway service because so many of our city’s subway stations are truly inaccessible to the elderly and people with disabilities. Buses are not only easier to board, but deliver riders closer to their destinations. Yet again, the most populous borough has been short-changed by the MTA.”

“The B51 bus route is a vital lifeline for residents because it connects them to other crucial bus lines; cutting this service is unacceptable,” said Council Member Letitia James. “Also, taking the bus is simply a better option for the elderly and the handicapped because of the lack of elevators at most MTA subway stops. It is reprehensible that riders, specifically those with special needs who depend solely on bus lines for travel, may now be inconvenienced and without safe transportation.”

BP Markowitz has repeatedly proposed alternative funding solutions to the MTA budget crisis, including: a modest increase in the gasoline tax levied in the entire 12-county MTA district and dedicated solely to public transit; raising the fees on vehicle registration based on weight and model type; equalizing the vehicle use tax in all 12 MTA counties—a tax for which New York City residents currently pay more; a “mega millions” lottery dedicated to mass transit; and the MTA cutting costs by consolidating its property assets, including the blighted building at 370 Jay Street in Downtown Brooklyn.

BP Markowitz is also reiterating his call on the MTA to rally the congressional delegation to get the federal government to stop shortchanging buses and trains. One in every three public transit users in the United States rides the MTA, yet the system is among the least subsidized, per capita, in the nation. He has also supported the City Council and Straphangers Campaign’s proposals to redirect federal stimulus money, currently reserved for capital expenses, toward system operations.