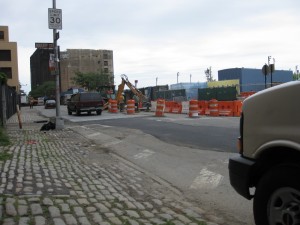 By all estimation, Tuesday afternoon June 15, was one of those uniquely beautiful days which should be spent outside, walking/rolling around Brooklyn Heights. Since I had not been down to Pier 1 Park recently, that was my destination after conducting some errands. However, you cannot fully appreciate my rage when I discovered that it is practically impossible for a person in a wheelchair to now get into Pier 1, without making a very dangerous trip along Furman Street in heavy traffic. This is completely unacceptable.

In my new capacity as a member of Community Board 2, I am reluctant to promote the opinion that people with disabilities are always complaining. I would like to think that as a concerned resident of Brooklyn Heights, I should not have to “ghetto-ize” myself into the de facto leader of the disability community, only being begrudgingly listened to in matters concerning accessibility. But for the time being, I’m going to embrace my new position as “disabled complainer” and make some observations.

The Brooklyn Bridge Park Conservancy and The Brooklyn Bridge Park Development Corporation have dramatically failed in preparing an adequate plan for getting people to/from the park. At both Pier 1 & Pier 6 there is a serious accident waiting to happen. Having people cross a busy on-ramp to a major highway or walk in the street while construction is occurring, is simply a bad idea. A number of my friends have been injured (corner of Clinton & Montague) or killed by being hit by automobiles. Consequently, I pay very careful attention to pedestrian safety considerations. Is it too much to ask that foreseeable problems related to pedestrian safety be addressed by the Conservancy and Development Corporation?

In terms of the features within Brooklyn Bridge Park, it does not appear that much thought was given to ensuring that all people could enjoy Brooklyn Bridge Park. In the Design profession, there is a concept called “Universal Design” which strives to create products, buildings and public spaces which are usable by everyone. The team that has been working on this facility seems to be unfamiliar with this concept. Additionally, this idea of Universal Design is important, because as the population ages, there are more people with varying disabilities every day.

Although there are a few features that are obviously accessible, (accessible port-a-san and some parking spaces), accessibility is not all that important. For instance, the crushed rock surface material at Pier 6 is a problem for many people with a variety of mobility impairments and, might even be illegal under the Americans with Disabilities Act (ADA). Likewise, from my limited investigation, I did not see any playground equipment that kids with disabilities might use. Another simple example of the failure to incorporate principles of Universal Design is with the telescopes found at Pier 1 which are inaccessible.

In the 1989 film “Field of Dreams”, Kevin Costner made his cliché statement “If you build it, they will come”. Logically, the opposite of that statement is that if something is not constructed, people will not come. If accessibility is not more visibly included in the Brooklyn Bridge Park, Brooklynites with disabilities will not come and not have the same opportunity to enjoy this world-class public space, which has been under consideration for more than two decades. The Brooklyn Bridge Park Conservancy and the Brooklyn Bridge Park Development Corporation needs to do a much better job of proactively creating a public space that all people can use and enjoy.