By Claude Scales on June 16, 2010 3:38 pm in Arts and Entertainment, Celebrity Residents, Sports 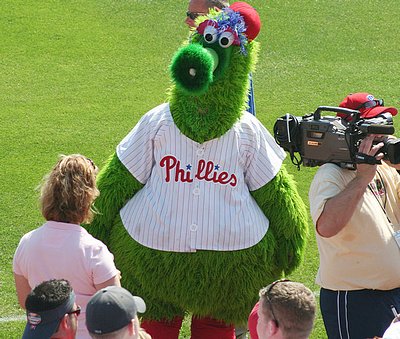 With the Yankees embroiled in a three game series with the Mets’ divisional rivals, the Phillies, and this Amazins fan uncharacteristically rooting for the Bronx Bombers, I was surprised to learn that the Philly Phanatic, the Phillies’ mascot (who, I will admit, has a lot more panache than Mr. Met), was created by Acme Mascots, a company owned by Bonnie and Wayde Erickson, and run from their Brooklyn Heights apartment. You can read all about it here (and–thanks to reader “Philly” for the link–here).

The success of the Phanatic led Great George Himself to commission Acme to design a mascot for the Yanks. They came up with a pinstriped character called “Dandy” (as in “I’m a Yankee doodle …”), who was about to make his debut when my Tampa homeboy, and then Yankee, Sweet Lou, had a run-in with the San Diego chicken, causing Steinbrenner to declare ex cathedra that mascots had no place in major league baseball. You can read the sad story of Dandy in Gothamist.