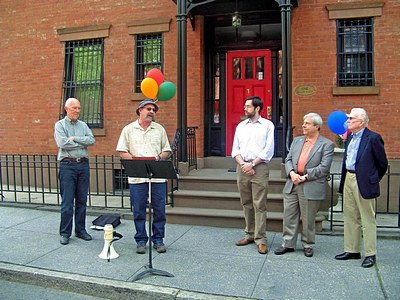 At yesterday’s Willowtown Fair, local residents and politicos praised those who, in the past and today, have worked and are working to preserve the neighborhood’s character and scale. In the photo above, William Ringler, a member of the Board of Directors of the Willowtown Association, as well as President of the Riverside Apartments Tenants’ Association, speaks about the struggle to preserve the Riverside Apartments courtyard, which the landlord has sought to effectively destroy in order to build an underground parking garage. Listening are, at left, Ben Bankson, President (sorry, Ben, I was looking at an old organization chart) of the Willowtown Association, and, at right, State Senator Daniel Squadron, Borough President Marty Markowitz, and Heights preservation pioneer Otis Pratt Pearsall. (More photos and text after the jump.) 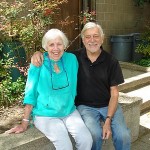 Afterward, Mr. Pearsall, who was instrumental in getting the Heights designated New York City’s first historic district, spoke of the great contributions to the preservation effort by this year’s Fair honorees, the husband and wife architectural team, Joe and Mary Merz (photo at left). In the early 1960s, Pearsall said, Willow Place was “very fragile”, with several vacant lots and some buildings in disrepair. Joe and Mary, then living on Grace Court Alley nearby, noted that Willow Place was, in Pearsall’s words, “an architecturally conspicuous block, boasting multiple houses on the Municipal Art Society’s 1957 listing of buildings that should be preserved.” At the same time, Pearsall said, it “came under the baleful eye of the Housing and Redevelopment Board and fac[ed] the imminent threat of a fateful ‘Urban Renewal Study.'” Pearsall then said:

I hope that Mary and Joe will write up and document the dramatic story of how, along with another former Edward Larrabee Barnes [the architectural firm with which they were previously associated] colleague, they were able to purchase the vacant lots on Willow Place at City auction and, with help along the way from Mrs. Darwin James, to complete in 1965 their meticulously scaled, award-winning houses in a startlingly appropriate modern idiom. 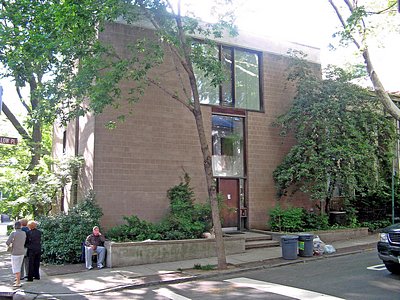 The photo above shows one of the three Merz-designed townhouses, this one at the corner of Willow Place and State Street. The others are farther north on the west side of Willow Place. Pearsall then continued:

And what’s more, their Modernist idiom directly inspired the [Brooklyn Heights Association] philosophy, welcomed by the early Landmarks Commissions, that to continue contributing to the treasure trove of Heights architecture each new building should represent the finest architecture contemporary with its date of construction.

He concluded, “Mary and Joe are indeed role models for all seasons, and we are both humbled and inspired by their example.” Update: Thanks to reader and Willowtown Association Director Seth Murphy for giving a link to the complete text of Pearsall’s talk Also, historian and preservation activist Anthony Wood, author of Preserving New York: Winning the Right to Protect a City’s Landmarks has kindly given us a link to his post on Landmarks45, which tells of the work of Mr. Pearsall and others, including BHB friend Martin Schneider, in preserving the architectural heritage of the Heights. It includes a link back to the video “Brooklyn Is Our Neighborhood”, made by Schneider and BHB’s own Karl Junkersfeld and first presented here on BHB.

The Fair included a table displaying photos of many buildings and interiors designed by the Merzes. Other tables offered various wares, including clothing, books, CDs, and toys. Iris Cafe offered a choice of grilled sausage with onion and mustard or ham and cheese, both on baguette. Your correspondent tried the sausage, and found it full of Yum-O Goodness. Another table offered baked goods and bags of delicious popcorn, lightly drizzled with caramel sauce. At the silent auction table, one could bid on art works, bottles of wine, restaurant meals, scale model cars, and a mink stole. 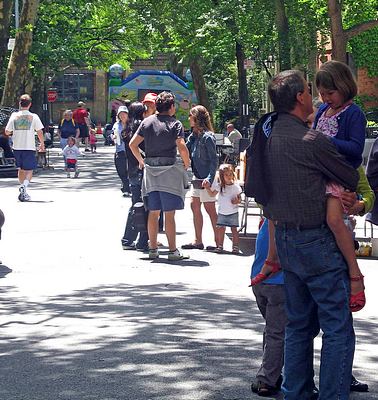 The inflatable blue structure seen in the background of the photo above is a fun space for kids. One father, buying a ticket for it at the entrance, was heard to say to his young daughter, “Unlimited bouncy-bounce!”
Share this Story: