This afternoon, your correspondent joined a group of local residents and a few journalists, including writers from New York Magazine and The Brooklyn Paper, for a tour of the soon to be opened section of Brooklyn Bridge Park inland from Pier 6, near Furman Street and the foot of Atlantic Avenue. We were guided by Ellen Ryan of the Brooklyn Bridge Park Development Corporation. As we entered the Park, we passed what will be a dog run.

After taking us into the Park and leading us to “Swing Valley”, Ellen talked about the work of the landscape architects, Michael Van Valkenburgh and Associates, how topography was added to the Park using fill from the tunnel being dug to give the Long Island Rail Road access to Grand Central, and the bike and foot path that will connect all sections of the Park. Unfortunately, she had to compete with helicopters. (More videos, photos and text after the jump.)

From “Swing Valley”, we went to “Slide Mountain.” Here, Ellen discussed some of the playground equipment, and the use of recycled long-leaf yellow pine wood salvaged from the cold storage warehouse buildings being demolished near Pier 1. She also responded to a question about the infamous metal domes in the Pier 1 playground.

Our next stop was what may be “the biggest sandbox in Brooklyn.” Ellen described how storm water will be collected to irrigate plants, providing, it is hoped, 70% of the water needed for that purpose. 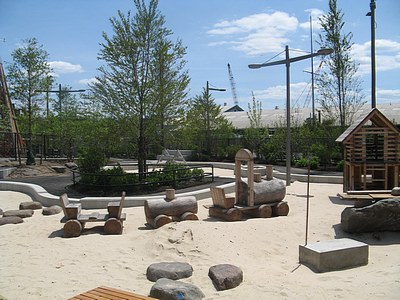 Here’s another view of the “sandbox”. 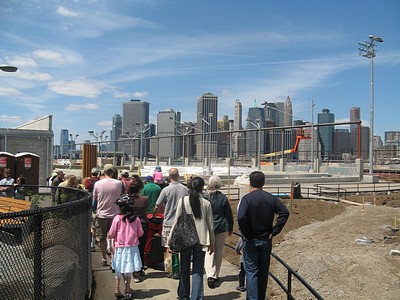 Past the “sandbox”, we approached the foot of Pier 6 itself. The concrete block building at the left of the photo will house a restaurant. To the right, at the north edge of the Pier, will be sand volleyball courts. The rest of the pier will be covered with gardens, supported wetlands, and a meadow. Ellen said that the playground portions of the Park are expected to open in early June. The Pier portion should be ready by late summer.
Share this Story: