By Heather Quinlan on May 15, 2010 6:52 am in Arts and Entertainment, Development, Events, Fun, Government, Photos 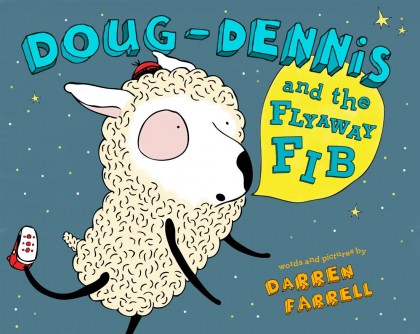 Fans of local children’s book author Darren Farrel will be lining up at Book Court Sunday at 11 a.m. when he signs his latest, Doug-Dennis and the Flyaway Fib. If you’re unfamiliar with the story, a handy summary is after the jump.

When best friends Doug-Dennis and Ben-Bobby go to the circus, something terrible happens. Doug-Dennis eats all of his best friend’s popcorn, and then tells a fib (It wasn’t me!), which grows and grows (Maybe monsters ate it!), carrying Doug-Dennis away.

As the lie gets bigger, Doug-Dennis flies higher, until he’s floating in a land of lies—some of them big, some small, and some just downright weird. Doug-Dennis misses his best friend, and realizes there’s only one way to come back down: by finally telling the truth.

This charming sheep is sure to become a favorite. (And that’s the truth.)

Be sure to stop by and say hello Sunday morning!