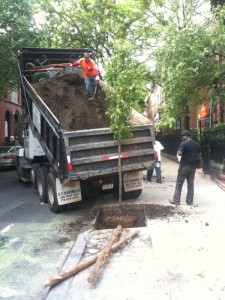 They are planting trees on Henry but the guys said they are skipping the one on the empty one on the corner—somebody is making the decision not to fill.

Also, an anonymous source said he planted a tree in that well last year, but the Park’s Department cut it down. “I turned around to do something and in three minutes, it was gone.” He then put a couple planters in its place, but was told he had to get rid of them because they obstructed the sidewalk.