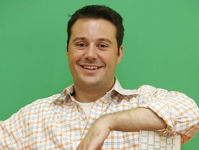 If it is possible for a person to sit in a chair and bounce off the walls at the same time, then that is exactly what Mike Germano (@mikegermano) did on a recent Monday evening in the DUMBO spot ReBar. But his energy is channeled in the right direction: toward his company, Carrot Creative, and the Digital DUMBO scene, which he has helped cultivate.

At just 28 years old, Germano, who grew up in New Jersey and now lives in the Financial District, is a pretty accomplished guy. He served a term as city councilman in Hamden, Conn., from 2005-2007, during which time he founded Carrot Creative, a new media marketing agency specializing in social media.

“We help brands build on social networks, and teach them and help them in great ways for them to have conversations with their customers and really turn brands into people,” he explained. Some of those brands include Crayola, the NFL, Disney, Ford, and the Islands of the Bahamas.

When Germano speaks of his achievements, it’s as if wild success was always in the stars. In high school, he and one of his future business partners, Chris Petescia, built websites that he described as early versions of blogs and social networks. In college at Quinnipiac, Germano furthered his ambitions with Robert Gaafar, who would become Carrot’s other partner, creating sites that helped students sell books and rate professors.

“For me, the Internet was a way for me to break the rules and get my message out there,” said Germano, who wanted me to point out that he was not wearing a hooded sweatshirt, opting instead for a pink gingham shirt and khaki pants.

“Every marketing and business class we took, no one was talking about this,” Germano said of harnessing the Internet’s powers. “We knew it was the future.” 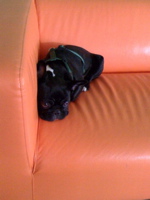 His name is Jonas

At Carrot Creative, which he claims was the first agency to use social networking in 2005, Germano and his team of 15 feel they can truly influence culture by sustaining brands. He shot down the notion that large advertising or marketing houses (some of which have tried to buy Carrot) could ever adequately perform the same services.

“When all these big companies try to hire people to head up their social media, they have no idea what they’re talking about,” he said boldly, pounding on the table a few times, as he did throughout our chat. “I know that fundamentally, they will fail.”

The decision to relocate to DUMBO from Connecticut in 2007 was a simple one for Germano and his partners. They briefly considered Union Square, but felt Manhattan, as he put it, “has a bit of an identity crisis, because there’s so much going on there.”

DUMBO, on the other hand, “was this little oasis of digital.” And once he realized there were so many other startups like his in the region, Germano’s inner politician was stirred to bring people together. He and several others formed the Digital DUMBO monthly meet-ups, which have been going strong—and growing strongly—for more than a year.

Not long ago, Germano joked to pals Sam Lessin of Drop.io and Brian Lemond of Brooklyn Foundry that DUMBO should be declared New York’s “Digital District,” to give themselves and others a louder voice, and it has turned into a genuine crusade.

“We appreciate the individual nature of small companies,” he said. “We need to show them they’re not alone, there’s help out there, and that it’s ok for Manhattan ad firms and brands to bring their money here to DUMBO.”

Which is exactly what they’ve been doing, at least as far as Carrot Creative is concerned. Germano now regularly finds himself turning down business, either because he doesn’t believe in the brand or because it’s not a good fit. But with so many digital companies saturating the neighborhood, is DUMBO starting to feel…a little crowded?

“Competition is always a good thing for the industry,” Germano insisted. “I would rather that. I think in the long run it’s beneficial to me as a company if all the best and brightest agencies that are my competition move tot he same geographic region as me.”

He strongly rejects the notion that digital is over-hyped, saying it’s “in a beautiful exploration stage of both users using it and brands understanding it.” Of course, no matter how harmonic the interplay, Germano understands one thing very well.

Though he’s tinkering with the idea of “inevitable” overseas expansion, Carrot Creative and its bright orange couch are in DUMBO for the long haul, which seems advantageous to both parties. Because if the outlook of at least one other person in DUMBO is as sunny as Germano’s, everybody is going to be just fine.

“Digital is the biggest, most important part of having an amazing future in our country,” Germano said, without a hint of hyperbole. Who wants to argue with that?