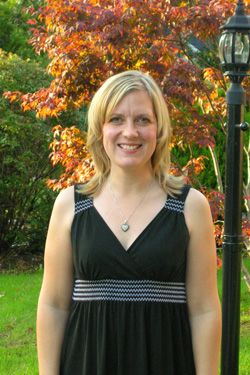 It’s difficult for a Jewish gal like myself to compare a Sunday service at The First Presbyterian Church of Brooklyn, founded in 1822, to others in the borough. But as a regular concertgoer throughout the region, I can say with conviction that the choir at First Presbyterian is worth the trip to Henry Street, regardless of religious affiliation.

And based on last Sunday, a hot, almost unbearably humid day, the congregants ain’t too bad either, bustling about the cushioned pews to say hello to each other before the service began, jumping up to sing along with the choir, and offering congratulations to the couple whose beautiful baby boy Filip was baptized that day.

“It’s a place where people feel really accepted,” said Amy Neuner, the minister of music at First Presbyterian, who walked into the church nine years ago to see the colorful stained glass windows and has stayed ever since.

Like many who attend the church and sing in the choir, Neuner and her family don’t live in Brooklyn Heights. A few years ago, she and her family moved from Park Slope to Malverne, Long Island, where she teachers chorus in nearby Valley Stream. Yet they relish this community within a community that, given its diverse constituency, bares little resemblance to the Brooklyn Heights outside its doors.

“It’s a very different feel from a lot of other churches,” said Neuner, who was raised in a “sort of right-wing, conservative, traditional, white, Baptist church” that her parents started in Wisconsin, where she grew up.

The nearly 60-member choir represents all ages, races, sexual orientations, and even religions; yes, one girl is Jewish. Despite their varied backgrounds, the group sings in absolute harmony, clapping and swaying along to joyful songs, and becoming appropriately reflective for the slower numbers like “I Need You Once Again.” 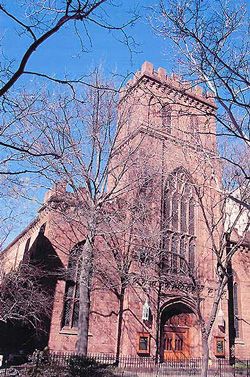 Neuner plays the piano during some tunes, and leads the choir with vigorous hand motions during others. A bassist and drummer often accompany the choir, which also features soloists. Last week, a former paid soloist, Bertilla Baker, performed a particularly moving song called “A Child is Born.”

Though she has no formal church training, Neuner confers with the Pastor each week to decide what the choir will sing that Sunday. “I think the choir is responsible for the emotional arc of the service, feeling where are the lows and where are the highs,” she said. “Does it feel like a day where people want to celebrate, or where they want to cry?”

Last Sunday, it was mostly festive, with baby Filip, his dads, Arie and Frank (both regular choir members), and much of their extended family gathered for his baptism.

“There’s such a huge difference,” Neuner said of the choir now versus when she joined them. Initially very classical with only 10 or so members, the group was transformed first by Neuner’s predecessor, an African-American man who infused gospel into the service, and then by Neuner, who grew the choir in numbers, and likes to include relevant, non-church music from time to time.

She emphasized the communal feeling at First Presbyterian, even though they are not all neighbors, strictly speaking.

“During ‘A Child is Born,’ I saw Filip, Frank and Arie…and through them was our Pastor, whose baby has been really sick and in the NICU for like four months,” said Neuner. “I could see her crying. It was this blend of really happy, really sad, but we’re all in this together.”