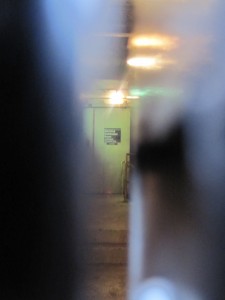 There’s been great buzz among the blogs today about the secret subway tunnel supposedly located on unassuming Joralemon St. Curbed did some more digging and seemed to confirm what many locals had suspected, that the “brownstone” at 58 Joralemon is really an elaborate subway entrance.

I walked over to check out the scene and took a few photos. Hindsight and blackened-out windows do indeed make the brownstone look laughably fake—the housing equivalent of an FBI van called “Joe’s Florist.” Though with the MTA’s financial woes, I can’t imagine many would be thrilled if they used their budget to decorate a fake house. Still, I was surprised when I peered through the metal doors labeled “Exit #1″ and saw what looked like the 4/5 station peering back. 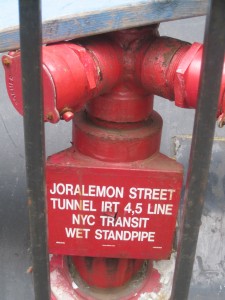 You can’t say that they took terrible pains to hide the place, though. The pipe in front about says it all.

PropertyShark lists the owners as the MTA. I hope if they do decide to decorate, they furnish it well. In the meantime, the Brooklyn Eagle says there are several such entrances in Brooklyn Heights—does anyone know of more? 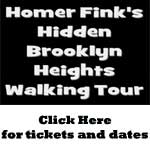 Mr. Junkersfeld’s Brooklyn Heights is Looking Up
Eagle: No Extra Stories for 75 Clinton