By Claude Scales on February 28, 2010 12:16 am in Arts and Entertainment, Brooklyn Heights, Events 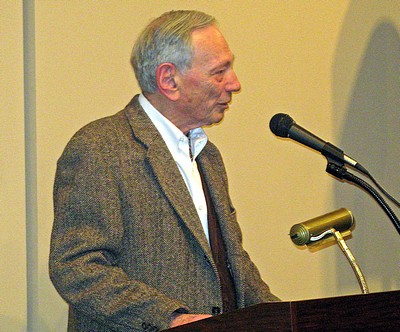 BHB reader and Brooklyn Heights Association board member Martin L. Schneider (photo above) gives us this account of last evening’s opening reception for the “Brooklyn in Prints” exhibit at the Brooklyn Historical Society:

A record-setting snowstorm couldn’t stop eager Brooklyn fans from trudging their way to the Brooklyn Historical Society Friday night for the opening of the BHA’S centennial Brooklyn in Prints show. Some 170 storm-clad visitors arrived to pore through bins of images of Brooklyn and peer at a once-in-lifetime exhibition of prize prints showing the borough in virtually all of its manifestations, from revolutionary battleground to today’s lively urban settings.

The images which seemed to capture everyone’s imagination were the super-size, 19th century aerial views of the New York harbor where Brooklyn Heights and its special features could be spotted. But there are also modern views of simpler things like the etching titled Brooklyn Deli by Joseph Essig and Maya Hardin’s aquatint, Subway Entrance on Montague Street. The theme seemed to be a picture and a price for every taste.

The framed prints, provided by the The Old Print Shop of Manhattan, also a centenarian institution, will be on view through Saturday, March 13. The display is in the long gallery down the steps from the main hall. A price list is available at the desk and a portion of any purchases go to the benefit of the Historical Society and the Association. A preview of the images may be seen at www.oldprintshop.com. 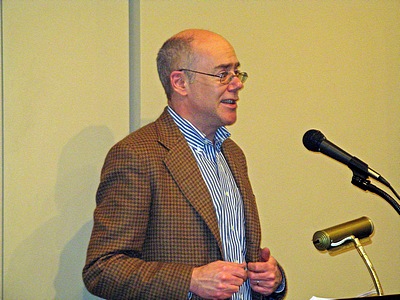 Francis Morrone, architectural historian and author of An Architectural Guidebook to Brooklyn, spoke about the historical context of the prints. One print, he noted, was from an illustration dating from 1877, but showed a completed Brooklyn Bridge and Statue of Liberty, though neither was finished until the 1880s. The Statue faces in the wrong direction. It also showed a row of high-rise apartment buildings lining Columbia Heights; buildings, he said, of a type not yet known in New York at the time. He drew some appreciative chuckles when he said of an illustration of the facade of the Brooklyn Museum made in the early 1980s that it was a good thing the artist got there when he did. 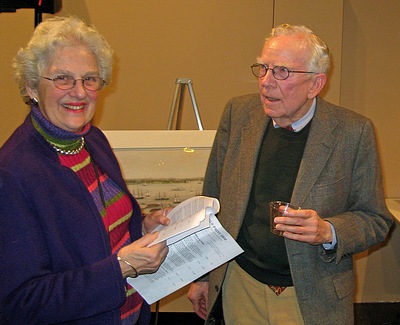