Facing the Fists of Fury 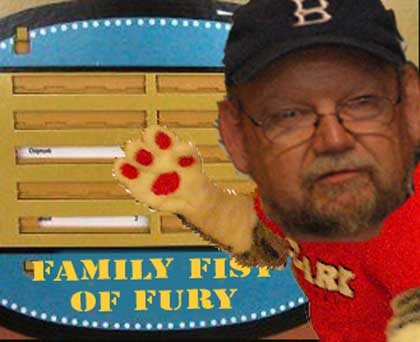 I never in my wildest flights of fancy envisioned being on a team representing Clark University. Last night my wife had a prior social commitment, so I showed up at Magnetic Field solo for the debut of Homer Fink's Family Fists of Fury.  Having no family along, I thought I would take in the action as a spectator, but Mrs. Fink assured me I would be placed with an ad hoc "family" to participate. Sure enough, a few minutes later I was asked to join the "Clark family," formed by two comely alumnae of that fine institution.  I explained that the closest I had come to their alma mater was driving past Worcester on the Massachusetts Turnpike.  Indeed, I said, I had come to regard Worcester as the Joe Btfsplk of American cities.  It could be sunny in Sturbridge or fair near Framingham, but as I drove closer to the City of the Seven Hills, clouds would gather, and somewhere around the Auburn exit Fiona the Pink Toyota's wiper blades would be going thwacketa-thwack. Nevertheless, I assured the ladies that I was proud to be an honorary Clark Cougar for the night.

Little did I know that I was destined to be the family's Joe Btfsplk.  We got through the opening round with flying colors, mostly thanks to my teammates' ability to think of things that you step on.  It's a word association game, in which you are given a category and asked to name something that fits in it.  The catch, which I didn't get until too late, was that the object isn't to give a "right," and certainly not a clever answer, but instead one that is most likely to be given by a person asked to make the association.  There were something like six possible answers, each assigned a point value in direct relationship to its popularity.  Thus, in the semifinal round, I wisely deferred to my teammates' suggestion that I respond to "long-necked bird" with "ostrich," which proved worth something like eight points, instead of "flamingo," which was one of the six but rated only a couple of points.  Later, as we were trying to fill out the category, I foolishly blurted out "cormorant," which made Dick Swizzle, on hand to help his buddy Homer, roll his eyes.  Cormorant, he said, was worth zero points.  "But," I sputtered, "it's a real long-necked bird.  I even shot a picture of one the other morning in the Empire-Fulton Ferry State Park."  (Here's the proof.) Never mind.  "Cormorant" isn't what Joe Sixpack or Suzy Creamcheese thinks of when you say "long-necked bird."

So the Cougars failed to advance to the final round.  I could sense Jonas Clark spinning in his grave.  I apologized to my teammates, but they were gracious and forgiving.  And, as a consolation, the champions were the "family" headed by BHB regular EJ.

I wish I had brought my camera to take a picture of Homer, resplendent in a dark suit, bold striped shirt and what in the '60s we called a "fat Max" tie, not to mention a pocket square that looked like it had been dragged through the salad bar at the second best restaurant in Nutley, NJ.  Next time, I will approach "Fists of Fury" with the proper (humble) attitude.