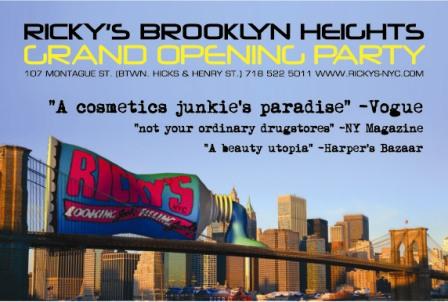 This weekend marks the "soft" opening of the new Ricky's at 107 Montague Street. We took a look last night and noticed an interesting mix of excited 20 and 30 somethings and perplexed seniors. Either way, 21st Century cool has arrived in Brooklyn Heights.

On Friday September 7, Ricky's "officially" opens with a big party beginning at 6pm. There will a live dj spinning tunes and Magnetic Field's Dick Swizzle is billed as a "special guest". We smell some Sudden Death Game Show action at the party!

No Nosferatu for Nabe Thesp
What happend on Monroe Place?