Trolleys: Our Past; Our Future?

As reported in The Brooklyn Paper last week, workers installing new water and sewer lines near the foot of Old Fulton Street encountered some trolley tracks that had been buried under asphalt for many years. After consulting with city officials and an archaeologist, the contractor “ripped up the tracks and threw them in the trash.” This drew an angry response from some preservationists and from advocates for the restoration of trolley service like Red Hook resident Bob Diamond (more about Brooklyn trolley history here and about Bob Diamond’s project here). The tracks in question were part of a once extensive system (see photo below, taken near Court and Joralemon streets some time in the 1930s) that served downtown Brooklyn and nearby areas, including a link to Fulton Ferry. 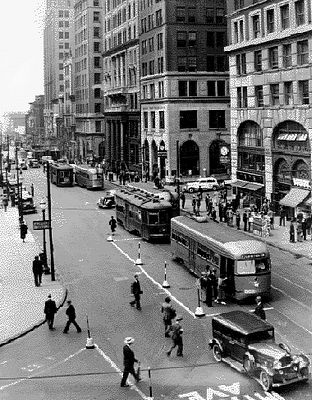 While restoring the previous system in its entirety would be expensive and disruptive, advocates like Diamond think that trolleys could be a boon to neighborhoods like Red Hook that are distant from subway stations.

One might envision a system linking the Borough Hall and Jay Street subway stations, via Court Street and Atlantic Avenue, to the south entrance to Brooklyn Bridge Park, and continuing south via Columbia Street to Red Hook, with a branch going northward from Jay Street and Borough Hall along Cadman Plaza to the High Street stop, then continuing down Old Fulton Street to the north entrance to the Park, Fulton Landing and DUMBO.

Similar ideas have been proposed in the recent past, and rejected; however, the concept may be worth reconsidering.